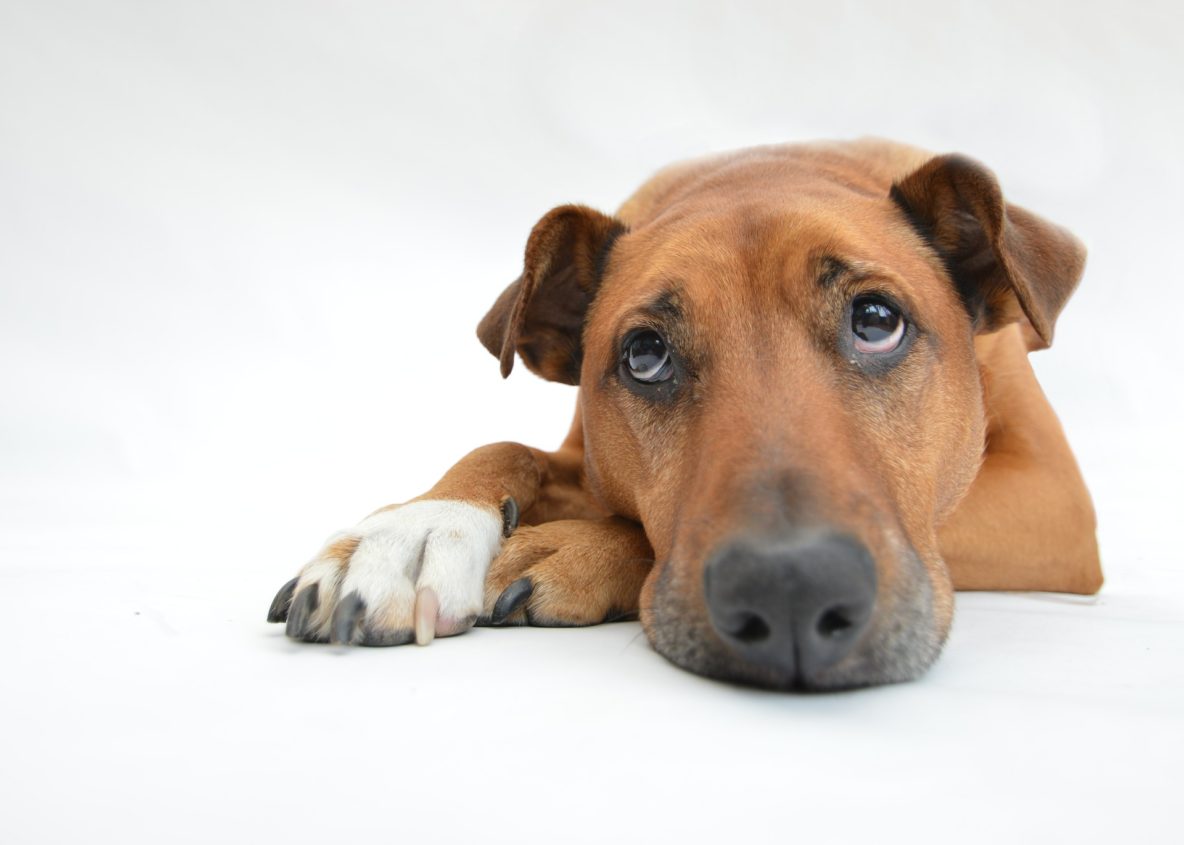 Let’s be honest here: my dog Barley frustrates me to no end some days. Don’t let my glowing Instagram fool you. Earlier this week, I reached out to a group of dog trainers to brainstorm a frustrating problem with Barley. I quickly realized that some dog trainers as a whole still have a long way to go with their interpersonal communication skills.

A quick update to this post — I managed to “fix” Barley’s counter surfing in the end by:

The combination of preventing the problem behavior in the first place (management) and teaching him that it was more worth his while to check for food on the floor than up high was key. I didn’t have to change our exercise routine or punish him with spicy foods. It was that easy.

That’s what I told my boyfriend, Andrew, when he found me on the ground, crying, earlier this week. Barley was hiding under the bed (he hates when I’m upset) and I sat next to a tin of olive oil. It lay on its side, its plastic cap missing. We just purchased it last night, and it was Barley’s latest counter-surfing victim.

Like a good boyfriend, he hoisted me up, gave me a hug, and asked if I needed wine. I declined and sat down to write. 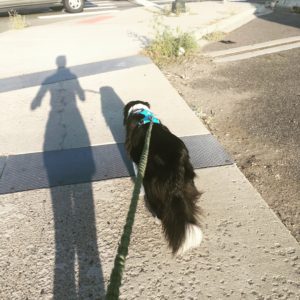 Why did this particular tin of olive oil drive me to tears?

It’s not that I love olive oil (I do). It’s not that that olive oil was expensive (it was). But this was the third incident this week of Barley pulling something from the counters that wasn’t a traditional food item (the others were a wooden spoon and several semi-clean tupperwares). I was at the point where I felt that I’d tried everything in my normal positive-reinforcement-trainer toolbox. It’s such a simple problem, isn’t it? So why was my dog continually knocking down and ingesting non-food items? I felt like I’d failed. And failure sucks.

So when I sat down to write, I wasn’t writing a blog post. I wrote out Barley’s behavioral history as if he were a client (check that out here). So I put myself in a client’s shoes and sent this behavioral history off to several groups of dog trainers, hoping for help.

I didn’t want to crate him.

Barley is fine in the crate – he sleeps there willingly, he doesn’t cry. But I work 10 hour days, and that’s a really long time to leave a dog in a crate. I didn’t want to leave him there, but I was at the point where I was worried he’d hurt himself if this counter-surfing continued.

As I started getting emails back from the other trainers, I realized just how awful it can be to be the owner of a “naughty” dog. Not only was my dog driving me up the wall, but now I had a ton of people telling me everything that I did with him was wrong. Many of the emails contained legitimate and helpful advice. A few were off the rails (one suggested that Barley has pathological anxiety due to his consumption of tampons – what?!). The problem wasn’t the advice itself – it was the delivery of that advice.

No one likes to realize that they’re doing something wrong. It’s even worse when you care about the thing you’re doing wrong, it’s strangers who correct you, and you feel like you know a lot about the issue at hand. All of these were true in this case. I love Barley, I’ve dedicated my adult life to animal training and behavior, and I didn’t know the people sending me these emails.

The advice I got was mostly good, albeit contradictory at times. It included:

Because the trainers I associate with generally adhere to LIMA (Least Intrusive, Minimally Aversive) methodology or other similar philosophies, I wasn’t told to punish Barley for his transgressions, use electricity, or do anything else that could harm him. The spicy food suggestion came verbally from trainers that I know well – they seemed ashamed to even suggest it.

I plan to implement the majority of this advice in various ways. It’s good advice from great trainers who know what they’re talking about.

I couldn’t shake the defensiveness. My dog is imperfect, but he’s mine. 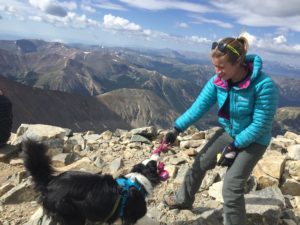 I think Barley and I are happy together – but talking to other trainers wracked me with doubt and guilt.

that started, “Your dog is bored. Your dog is anxious. You can’t leave your dog for that long. His basic needs aren’t being met. 10+ hours without potty? That’s too long!”

The other trainers meant well, and they’re not wrong. But it was hard to read. I love Barley desperately and do everything I can to make his life awesome. I’m proud of the life we’ve built together in the months since I brought him home. So it hurt to feel like so many people who don’t know us were judging me and implicitly asserting that I failed him.

It was worse than the feedback I got from my “Frustration in dog training” article because it came from trainers with a similar philosophy to mine.

I started reading between the lines of the emails. Dark shadows whispered into my ear,

“Why did you get this dog? You don’t deserve him. You can’t possibly own such an energetic dog when you work these hours. Why did you adopt a dog if you can’t afford a dogwalker? Your dog is miserable, and you did it to him. It’s not that your dog is imperfect – you’re just a crappy human.”

It’s been awhile since I’ve been plagued with thoughts this dark.

Time and time again, I had to take a step back, close my eyes, and exhale. That’s not what the other trainers were saying. They were looking out for my dog. The trainers wanted to help. They were on my team. Their advice was sound. I was the one making the demons in my head. No one was outright accusatory. I was putting words in their mouths.

Exhale again. Ok. What are they saying? How can I implement it? Ignore your own emotions, pretend this is for a client. Is it good advice?

I’m sensitive and don’t take criticism well. Ask Andrew, ask my parents. It’s not one of my natural skills. It’s also fair to mention that I’m suffering from my “time of the month,” which never helps my emotional intelligence!

But it still was a valuable lesson for me. How often have I “helped” a dog owner by offering advice that just made them feel defensive, worthless, guilty, or angry? How many clients have I lost or hurt by not being careful with my advice?

Again: these other trainers were right. Their advice was (mostly) good. So why was I not taking it well?

What could the other trainers have done better?

It was really hard for me to swallow the bitter taste of their delivery. If more of them had led their emails with,

“Wow! You’ve really tried a lot already with him. Have you thought of…”

Or, “Man! It really sucks that you have to work 10 hour days. You’re very lucky your dog is able to appear calm after all those hours. Is there any way you could get him a dogwalker?”

Or “Counter-surfing is actually a hard problem! I dealt with it too. Here’s what I did…”

Leading with advice and skipping the commiserating is a turn-off. Especially over email. This is a lesson that I’ve learned in classes and now in real life. I hope the lesson will stick now.

It would have been easier for me to listen to their good advice if they sugar-coated it, a bit.

As mentioned above, trainers also should be very careful to understand situations well before giving advice. Ask questions before prescribing treatments or spouting diagnoses.

I asked for the advice. I took it, and I’m grateful for it. No harm and no foul here. But this foray into the client half of dog training taught me a lot about delivery. Giving advice about people’s best friends is a tricky thing. Dog trainers must be able to convey the importance of their concerns without alienating their clients. If we just focus on the dogs, we’ll lose the people. 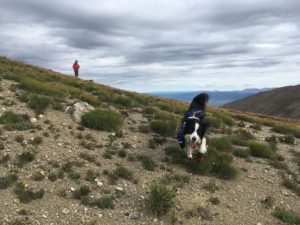 Colorado’s oncoming fall means a reduction in our hyperactive lifestyle.

In the meantime, Barley has a dogwalker and his crate is all set up. We’re done with marathon training and heading into fall. His activity levels will naturally decrease. We’ll do more decompression and relaxation training. I’m focusing on loving him and enjoying our time together. It’s ok that my dog is imperfect, because we’re still a great team.

And I’ll look forward to the day that a dogwalker isn’t a huge financial concern – or the day where I’m not working such insane hours. I’ll take the lessons that I learned from “being a client” and put them to use for my own clients at Journey Dog Training.