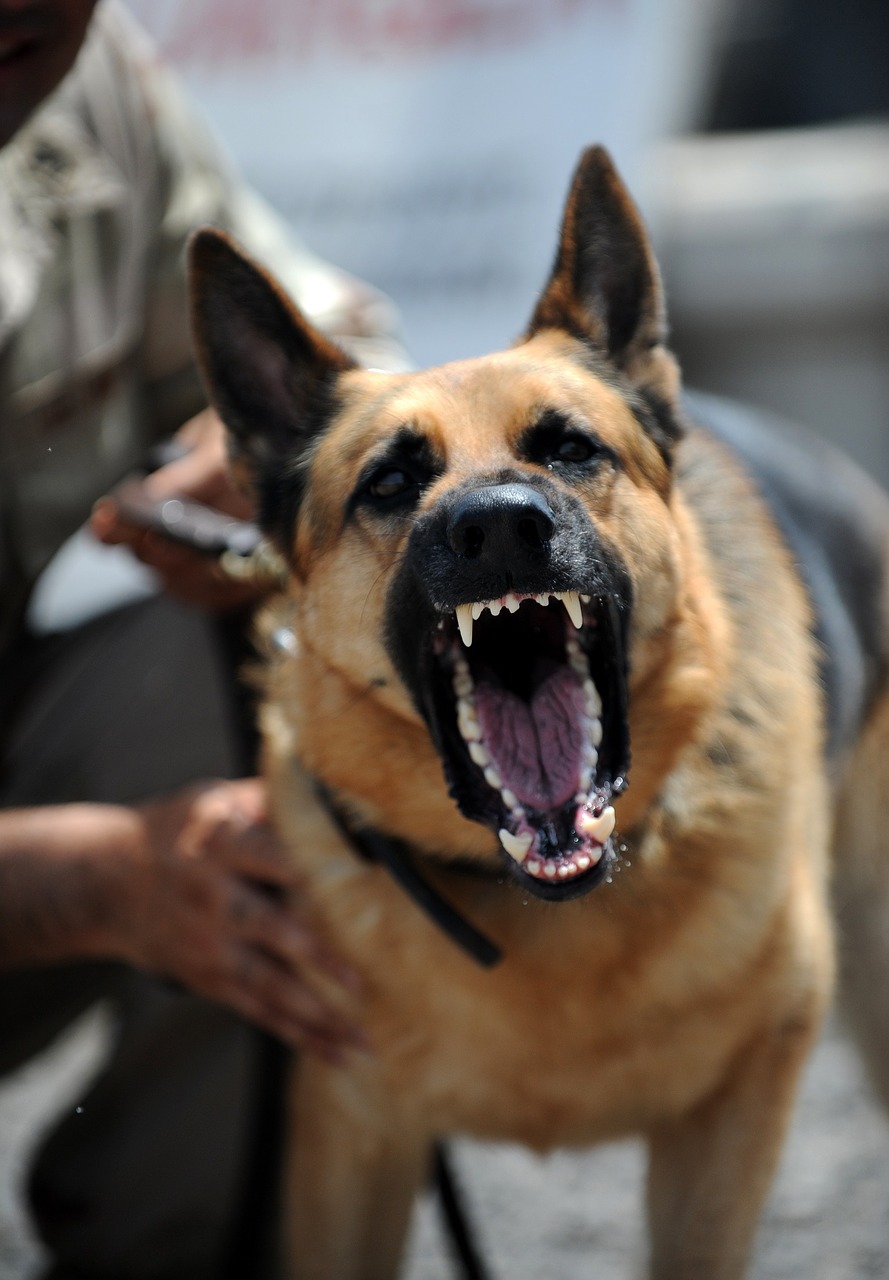 Sometimes, people come to me asking if their dog is a dangerous or “red zone dog.” The reality is, all dogs can bite and would in the wrong situation. Some dogs, however, are far more dangerous than others.

As a behavior consultant who loves working with tough, marginal dogs, I see a lot of scary dogs. When I worked at the fourth largest animal shelter in the U.S., we saw several each week. I have taken a lot of time to study dog behavior so that I feel (relatively) comfortable assessing and training dangerous dogs.

If you’re worried about your dog’s behavior, consider purchasing our e-book, Practical Solutions for Aggressive Dogs. It’s affordable and thorough!

What is a Red Zone Dog?

The term “red zone dog” is not a term I like. Articles that talk about red zone dogs sometimes use words like “dark, evil, or psycho.” When I say “red zone dog,” I mean a dog that is dangerous.

Red zone dog means different things for different people. If you think that your dog is dangerous and you think he’s too risky for you, your life, and your family, then he’s a red zone dog to you. I think that’s legitimate.

Like with most things aggression-related, there aren’t really hard-and-fast rules for determining how dangerous an aggressive dog is. For example, my own dog Barley will growl if other dogs approach his food bowl. Since we don’t have another dog, this isn’t a big deal at all to us. But in a different home, his resource guarding could quickly escalate to a more serious problem.

That said, there are a series of questions that I like to ask people when trying to determine how serious an aggression case is. Many of these questions are derived from Michael Shikashio’s Aggression A-Z Course.

28 Questions to Ask Yourself About Your Aggressive Dog

I created this questionnaire to get a grasp on how risky a case was, using a combination of my experience in the animal shelter and in homes (and drawing on the wisdom of others). The more questions that a person answers “yes” to, the more serious the case (and the more dangerous the dog).

Six questions about the family and living situation:

Four questions about the dog’s demeanor, history, and physical build:

Ten questions about the dog’s aggression:

Keep score and tally up your dog’s behavior. As I said, the definition of “red zone dog” is based on your own comfort and skill level. However, these 28 questions are also meant to get at your own ability to manage and control the problem.

What Does My Dog’s Score Mean?

As a general rule, a dog that scores above five on this scale should probably see a trainer unless those points largely come from the “Family and living situation” section. Then again, if you’re worried enough about your dog’s behavior to read this article, your dog is probably a candidate for training!

A dog with a score of two or three can still be pretty scary – for example, if I had a young child (1) and a dog who unpredictably (1) and frequently (1) growls (just 3 points), that’s a serious situation!

On the flip side, a large (1), anxious (1), untrained (1), new-to-you (1) dog that takes a while to calm down after incidents (1) and is frequently (1) triggered by a lot of things (1), resulting in growling at you (1) is a cause for concern, but arguably a less serious scenario as long as the aggression is low-level and predictable (despite scoring 8 on our scale).

A dog that scores above ten on this scale is generally quite concerning and should see a behavior consultant who is well-versed in positive reinforcement based training and aggression. Reach out to me and I’ll help you find someone good!

Most homes are not well-suited to keeping dogs that score above ten on this scale. A dog that scores fifteen, twenty, or more is probably a very serious case indeed.

If the bulk of your points come from the “family and living situation” section, rehoming your dog may be a legitimate option. However, it can be a very difficult decision to rehome a potentially dangerous dog. Again, consult with a behavior professional to get their opinion.

No matter what your dog’s score is, it’s smart to get help.

Send me a copy of your scoresheet at kayla@journeydogtraining.com and I’ll help you come up with a preliminary game plan – for free.

Odds are, I’m going to suggest a muzzle at the minimum. Management is always the first step.

There are no easy answers with aggressive or red zone dogs. Training, rehoming, or euthanasia are really your only options. Training is hard and doesn’t always work. Rehoming can be risky with dangerous dogs, and not many people are lining up to take on a dangerous new pet. Euthanasia is devastating, but sometimes it’s the only safe option. 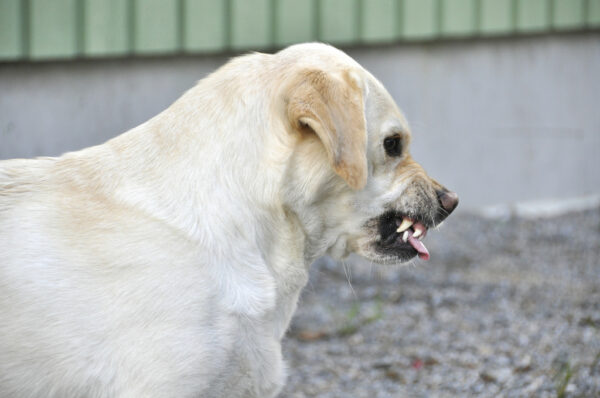 Why Shouldn’t I Correct My Red-Zone Dog?

Well, we’re going to correct the behavior (and the underlying emotions). But we’re not going to administer corrections. If you want a detailed overview of how I work with aggressive dogs, check out this article. Take it from a dog behavior consultant with years of experience, not a T.V. star, your local obedience trainer, or Joe Schmoe down the street.

Reacting to aggression with aggression is not a great way to create peace and harmony. Instead, skilled trainers will resort to using counterconditioning to change your dog’s emotional response to his triggers. Before any of that can happen, though, a behavior consultant will help you figure out how to prevent the aggression from happening.

Once you’ve got the situation under control and everyone is safe, it’s time to work on counterconditioning. While you teach your dog that his former triggers are actually the signs of treats coming his way, you can also teach him an incompatible coping behavior.

For example, I treat my dog’s food aggression like this:

If you catch your dog acting aggressively, the best bet is to interrupt it with a cheerful or calming voice, remove your dog from the situation (or yourself, if you’re the thing your dog is upset at), and then calm your dog down. For example:

“But Kayla,” you might be saying, “That’s a lot of treats. I don’t want my dog to get fat AND I don’t want to reward him for being a jerk!”

I’m right there with you. I keep careful track of my training client’s food and weight. We reduce their meal size to accommodate treats.

Let’s look at a human example. If I’m in a pissy mood and I start picking at my boyfriend Andrew (usually by yelling at him to turn the music down or getting unreasonably irritated with his driving), he generally has two responses: respond to my aggression with aggression of his own (causing a fight) or being kind and understanding, and offering to cheer me up with ice cream.

Is he rewarding me for being a jerk by giving me ice cream? Not really. The ice cream calms me down and makes me feel all warm and fuzzy towards him.

You can read more about my dog training methodology here. I also have a big old primary literature kit that goes over the science of different training methods, if you’re into that sort of thing.

Let’s be like the kind, understanding, and cheer-you-up version of Andrew with our dogs.

Positive reinforcement works, and it’s got none of the nasty fallout potentials of correction-based training.

E-collars, prong collars, yelling, physical manipulation, and other forms of correction have been shown to cause aggression in some studies – so let’s not risk it.

In short, everyone’s definition of red zone dog is different. This scale can help you get a good idea of how serious your dog’s case is.

If you send me an email with a copy of your scoresheet, I’ll give you some free help. Regardless of what you decide to do, reward-based training is a far safer and better bet than using correction-based training, especially with red-zone dogs.

I’ve written quite a bit about calming aggressive dogs here if you’d like more of a nitty-gritty training plan on the subject.