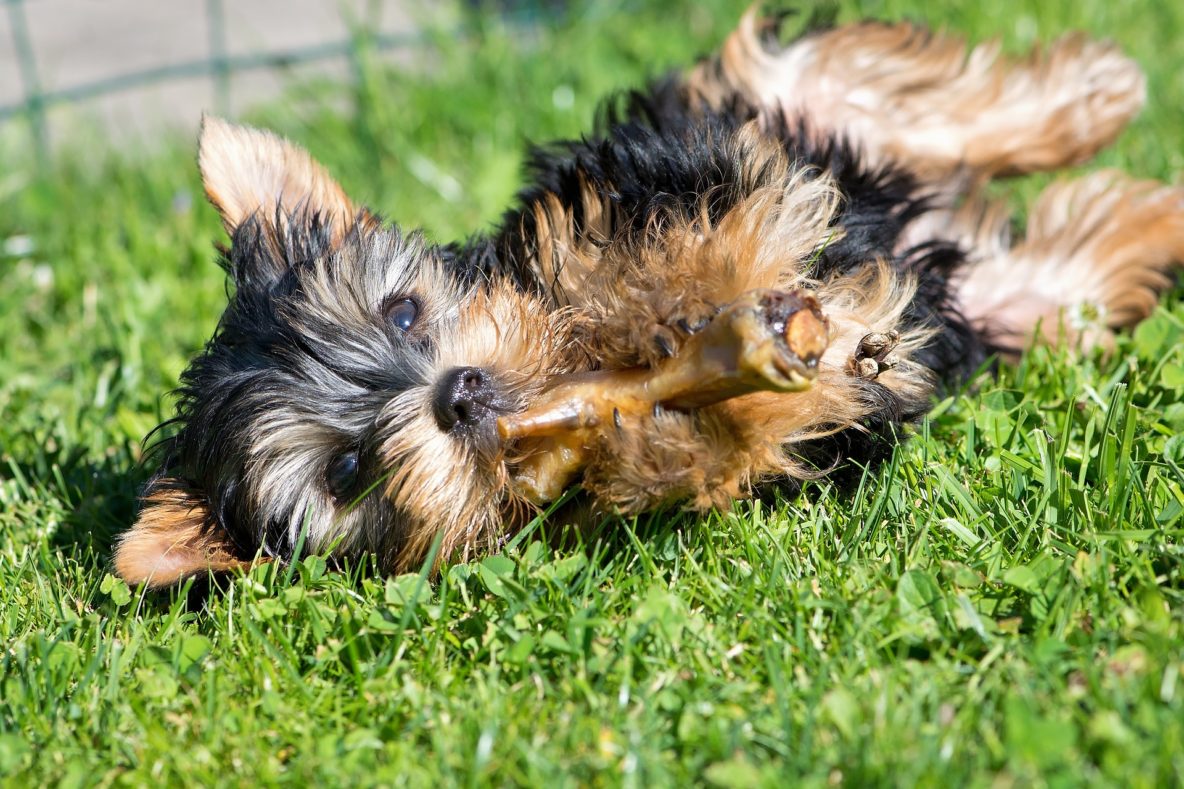 Sarah A. writes — I just got a new puppy, and would love your advice! I’d love to teach my puppy to stop eating everything. She seems to want to eat every single thing she finds outside. I keep having to take things from her mouth so she doesn’t choke or puncture something or ingest large amounts of grass. When I can get a treat out of my hip bag fast enough, I replace the object with a treat, so she won’t have such a negative association with me taking stuff from her.

But even still, she resists a bit, and I would rather she not eat the stuff on the first place. But I also struggle to get her attention in a way that will still allow her to calm down and go to the bathroom when we go outside. Do you have any advice on teaching a puppy to stop eating everything?

Want more on teaching impulse control and other real-life skills? We’ve got a product for that! Purchase our 29-page e-book, Polite Greetings and Life Skills 101.

For more help with puppy-specific behavior, check out our archive of puppy-centric articles.

Oh, the joy of young puppies. You’re trying to do potty training right, so you’re constantly going outside with a pocketful of treats. But your pup would rather eat grass, wrappers, bugs, twigs, or even rocks than go potty and get her treat! How do you teach a puppy to stop eating everything?

Sarah is already doing a great job by bringing treats on the walks. She’s able to distract her puppy from inedible things and then reward her for complying. But there are plenty more tricks to try to help teach her puppy to stop eating everything.

Don’t forget to throw in some enrichment in the form of puzzle toys. Relaxation work and nosework are a must-do for high energy dogs as well.

Increased exercise and enrichment will do a few things:

4. Make paying attention to you on walks WAY more fun than eating things.

You’re already doing a great job by carrying treats. If you’re doing clicker training, you can start clicking and treating every time your puppy looks at you. This is called a “check-in” and it’s another great skill for your dog to have. If your treats are good enough, this exercise alone will help keep your pup’s attention on you. When you hit a roadblock with your pup’s attention, try these 3 things:

A Note on Nutrition: Sometimes, puppies eat everything in site because their stomach hurts. This can be a symptom of allergies. Consider giving your dog specially formulated foods for dogs with allergies. You might just fix the problem by changing what you feed your dog!

Last-ditch efforts: it’s possible, though unlikely, that Sarah’s puppy suffers from Pica. This is an ill-understood disorder that results in the compulsive eating of inedible things. It’s unlikely due to the puppy’s age – many puppies just eat everything they can get their mouths on because they’re puppies. But if it turns out that Sarah’s puppy never grows out of this, it’s time to get more help. Muzzle training is a good place to start for dogs with Pica because it keeps food out of their mouths. Hopefully, it doesn’t get to that point!

When (not if) Things Slip Up 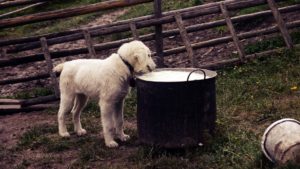 It’s ok. Your puppy will get ahold of some disgusting dead fish, or a pinecone, or a pizza slice. If you feel comfortable, use your finger as a hook to remove things from your dog’s mouth. It’s important to praise heavily afterward. Ideally, you’ll then give your dog a bunch of treats or a good round of playtime. This will help keep her comfortable with your hands near her mouth. If you tackle her to remove tasty things too often, and she’ll start being suspicious of you!

In some cases, it also might be ok to just let it slide. Just a few weeks ago, Barley got a mouthful of shredded sweet potato as we walked down the street. I have no idea why there was an open box of shredded sweet potato on the sidewalk, but that’s a mystery for another day. I asked him to drop it and he lifted his head, leaving the rest of the box with just a bit of food in his mouth.

By the time I tried to clean it out with my finger, he’d already swallowed. I sighed, hoped it wasn’t rancid, and we moved on. It’s ok. He was fine. (Don’t do this if what your dog ate is dangerous – in that case, get professional help to remove the object medically).

Teaching your puppy to stop eating everything doesn’t have to be a chore. If you’re really stuck, check out our options for online dog training. I can help!

Most of the ways to teach your puppy to stop eating everything are game-like. These are good skills for your pup to have anyway.

Many puppies simply grow out of this alarming and frustrating stage. But in the meantime, working on increasing her impulse control, increasing exercise, and playing training games will work wonders.