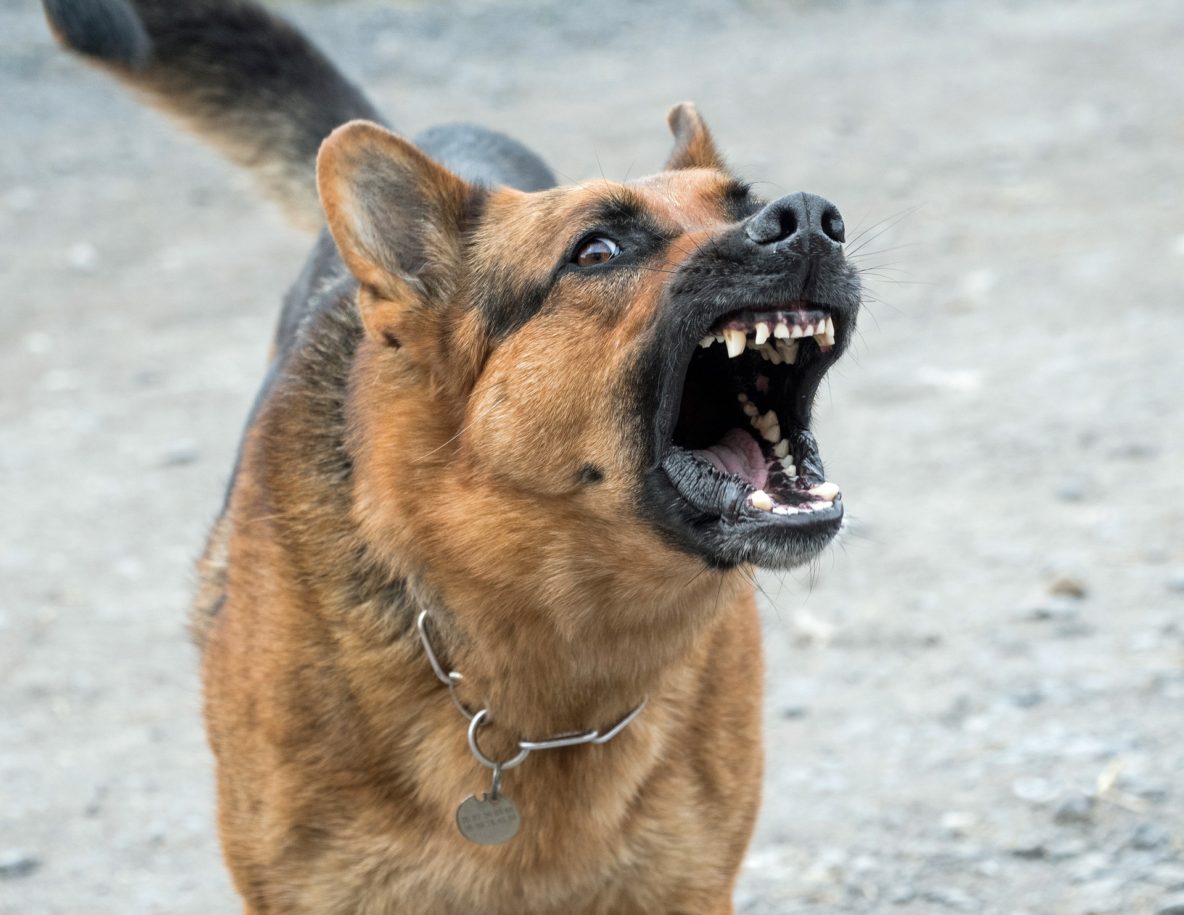 Just as you’re starting to enjoy walking your dog, she explodes into a frenzy of barking and lunging. She almost pulls you off your feet as she strains towards another dog. Or perhaps you notice when you’re home, and you realize that your dog loses her mind whenever another dog walks by on the street.

Owning a dog that barks and lunges at other dogs sucks. Trainers call this problem “reactivity” or “leash reactivity,” and it’s a really common behavior problem.

Why does your dog bark and lunge at other dogs?

Getting to the bottom of why your dog does what she does can be a valuable insight, but isn’t 100% necessary for fixing her behavior. Our book, Practical Solutions for Aggressive Dogs, can help!

You will also find plenty more advice in our archives about reactive dogs.

But let’s get to the root of your problem here, first.

We’ll go through some basic questions about your dog’s reactivity (barking and lunging) and how to fix the problem.

“Leash reactivity” or “reactivity” is a blanket term that trainers use to describe dogs that bark and lunge at other dogs. In essence, we’re saying that these dogs are overreacting to stuff around them.

These dogs are easily provoked. In most cases, just seeing another dog is enough to set them off.

Most dogs that bark and lunge at other dogs are really stressed out by other dogs. They might be scared, aggressive, or overly excited.

Seeing another dog without being able to escape, attack, or go say hi is generally “upsetting,” so the dog barks and lunges.

We can look at barking and lunging as a “distance increasing” behavior in most cases. Your dog is trying to get the other dog to go away.

The exception here is dogs that bark and lunge because they’re so excited to go say hi that they can’t stand it. These dogs bark and lunge in more of a fit of frustration than a defensive display.

Is My Dog Aggressive?

Barking and lunging is basically a threat display meant to keep others away (as I said, in most cases). It can spill over into aggression, but it’s not quite the same thing at this stage. It’s more of a threat, than actual violence. 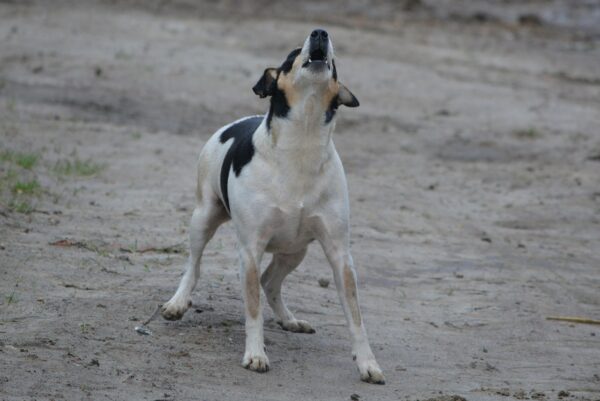 Why Does My Dog Bark and Lunge at Other Dogs?

There are a lot of reasons that your dog might be barking and lunging at other dogs. Since we can’t ask your dog, we can only guess. Here are a few of the most common (and best) explanations for this behavior:

Of course, not all shy dogs or dogs trained using corrections start barking and lunging at other dogs. There’s a genetic component to this behavior – some dogs are just more likely to develop this problem than others.

Pair that with in-utero hormone exposure, early life experiences with the litter and the breeder, ongoing socialization, and ongoing training, and it’s very difficult to point to one specific reason for your dog’s barking and lunging.

All of these factors can come together to “make” your dog bark and lunge. You might never know exactly what causes your dog’s reactivity. But you can take steps to fix it. 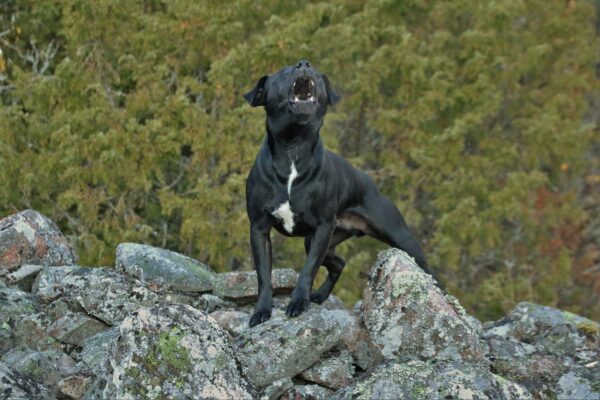 How Do I Stop My Dog From Barking and Lunging?

As you can imagine from above, I don’t recommend using correction-based training for dogs that bark and lunge. These training methods can get results with some dogs and skilled trainers – but they often backfire. Using praise or petting alone isn’t enough to override the intense emotions that most reactive dogs are feeling. Finally, using treats incorrectly can be downright useless.

So how do we fix it?

Prevent Your Dog From Barking and Lunging

This is an integral first step. Make sure you know exactly what causes your dog to bark and lunge. Is it kids, dogs, men in hats, bikes, cars?

Then make sure you know how intense that thing has to be to cause problems. For some dogs, a sleeping dog across the street is no biggie, but a running dog in agility class is a Very Big Deal. Distance, speed, number, and volume of the “bad things” (called triggers from here on out) can all change how your dog thinks about them.

Now it’s time to avoid those things. Exposing your dog to them over and over won’t cut it. This isn’t about “socialization.” It’s a bit late for that!

You might need to change the time and route of your daily walk. Start paying attention and crossing the street when you see the triggers. Turn around if you have to.

Basically, do everything that you can to avoid putting your dog in a situation where she’ll bark and lunge.

Of course, sometimes things will still go a bit south. If your dog starts barking and lunging at something, you’re in damage control mode.

When you’re handling a dog that’s barking and lunging, you have a few strategies:

Feeding her no matter what she’s doing is called classical counter-conditioning, and it’s actually a foundation of good learning theory. Trust me (and trust the science).

If your dog is already barking and lunging, don’t try to get her to sit or make eye contact with you. That’s where treat-training can go really wrong for this problem! Your dog is totally in her “lizard brain,” and isn’t likely to comply with your commands. You’ll just get frustrated (and feel stupid, if you’re like me), and she’ll keep barking and lunging.

How to Really Stop Your Dog’s Barking and Lunging

Of course, reacting to your dog’s reactivity isn’t the whole story. Nor is trying to live in a perfect bubble where nothing ever upsets your dog.

What you actually have to do is train your dog to make her less emotional about whatever her triggers are. This is best done with help from a dog behavior consultant (remember, I offer email/text support, 15-minute calls, and 1-hour calls).

I’ve been there. My first foster dog, Naomi, was incredibly dog-reactive, barking and lunging if she so much as saw the silhouette of another dog from across a soccer field. I tried yanking on her collar, pinning her to the ground, trying to make her sit, and trying to force her to eat when she was wild-eyed and slobbering from trying to attack the other dog. None of it really worked.

What eventually worked for Naomi and me? The same thing that’s worked for thousands of other dogs that bark and lunge at other dogs.

We started teaching Naomi that other dogs made good stuff happen for her. We started small – a stuffed dog across a soccer field. If she glanced at the stuffed dog, she got a piece of chicken.

Then we used a real dog. A glance at the dog made chicken rain from the sky.

If Naomi saw another dog and then looked at me, she got treats.

Then the dog got closer. And still, Naomi just had to acknowledge the other dog’s presence and then look back at me in order to get chicken.

The dog started to walk, run, jump, and even look at Naomi. And still, she just had to notice it and then look at me in order to get treats.

Then we started practicing obedience behaviors around other dogs. Sit, down, hand targets.

We did some other stuff, too – like Karen Overall’s Relaxation Protocol. Many of the dogs that I work with nowadays are also on behavioral medication. There are lots of other exercises and games that help teach a dog not to bark and lunge, but most of them come down to one basic principle: teach the dog that her triggers make good things happen, especially if she chooses to ignore them.

There’s no need for corrections, force, or even obedience in the traditional sense.

Naomi got adopted several years ago after I’d had her for about two months. She still can’t play with other dogs or pass them on the sidewalk if they’re too close, but she can let them pass while she steps to the side.

If you’ve got a dog that barks and lunges at things and you’d like help, I’m here for you. Check out your options for online training today.