Kayla grew up on a farm in Wisconsin, spending her days training homing pigeons. She started Journey Dog Training when she was in college. She apprenticed at All Breed Rescue and Training, a rescue that specializes in helping behaviorally difficult dogs. She spent all of her spare time reading about animal behavior.

She graduated from Colorado College with a degree in biology. After college, Kayla continued training dogs part-time while she worked for a conservation advocacy nonprofit.

Around that time, she joined the International Association of Animal Behavior Consultants.

She later got a job at Denver Dumb Friends League, the fourth-largest animal shelter in the U.S. There, she helped assess, train, and adopt out thousands of dogs of all shapes and sizes.

You can read all about Kayla's experience in her LinkedIn or CV.

She met Barley, her border collie, during her time at the shelter. They've been fast friends ever since. She and Barley dabble in the sports of obedience, herding, agility, scentwork, canicross, and skijoring. They're never far apart!

Kayla left Denver Dumb Friends League in 2018 to build Journey Dog Training and pursue work as a freelance writer, specializing in animal behavior. She spent a year living out of a van while driving from British Colombia to Panama with her boyfriend and her dog.

Kayla and her family currently live in Missoula, Montana. 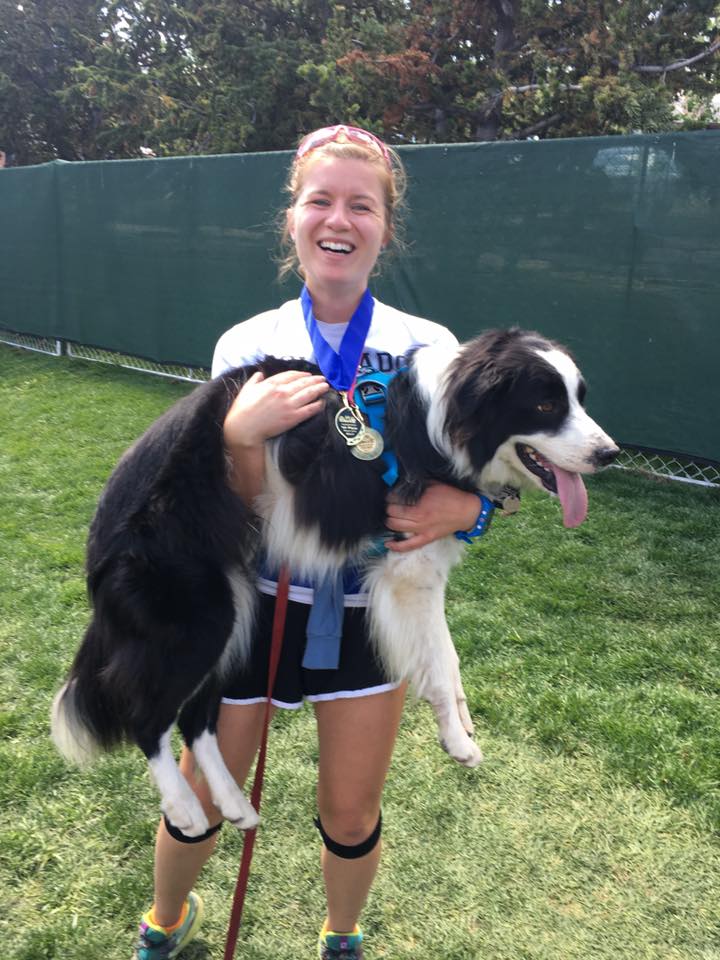 Amy is a Certified Professional Dog Trainer - Knowledge Assessed through the CCPDT. She is also a graduate of the Fear Free Shelter Program and a member of the Pet Professional Guild.

Originally from Missoula, Montana, Amy trained her first dog in high school through her local 4-H club. However, it wasn’t until she adopted a reactive shelter dog in 2013 that she started her force-free training journey. Through a combination of Grisha Stewart’s Behavior Adjustment Training, Leslie McDevitt’s Control Unleashed, and endless support from her dog-training mentor, Amy’s first reactive pup was able to learn the emotional self-regulation skills to successfully live with another dog.

Amy enjoys facilitating communication between dogs and humans to fulfill the needs of both ends of the leash. Her favorite part about science-based dog training is that anyone can learn to do it! She also loves learning the latest force-free training methods from zoologists and behaviorists, and she dreams of someday working with a sea lion.

In addition to working for Journey Dog Training, Amy also teaches group classes and provides in-person behavior consultations for Pawsitive Dog Training in Fairbanks, Alaska. She has worked for the Fairbanks North Star Borough Animal Shelter since 2013 where she focuses on enrichment and socialization. Amy is also a board member and secretary for Golden Retriever Rescue of Fairbanks. She lives in the Alaskan forest with her two dogs Liv and Cole, who enjoy barn hunt, tracking, scent work, and agility. 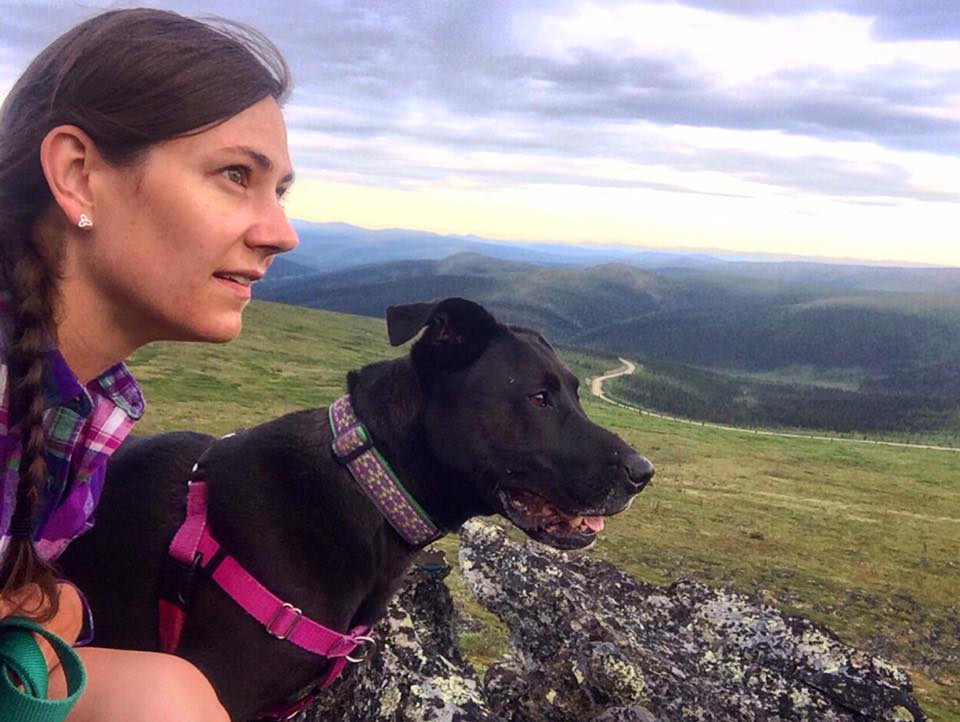 Logan is a dog trainer and group class instructor living in North Carolina. In 2017 she graduated from UNC-Chapel Hill with a degree in Biology with plans to go to graduate school for marine science. But after adopting her current dog, JJ, she found her love of animal training and behavior and changed course.

She began shadowing a local positive reinforcement dog trainer in North Carolina, and in 2019 she was hired on as a dog training assistant before quickly moving up to teaching group classes. In addition to taking private clients through Journey Dog Training, she currently teaches local introductory manners classes as well as trick dog classes and “for fun” agility classes.

Logan is currently enrolled in the Karen Pryor Academy Dog Trainer Professional program to earn her KPA certification in Spring 2021. She is a dog training nerd at heart; she loves being in school again to further her knowledge of training and behavior and better help her clients and their dogs. 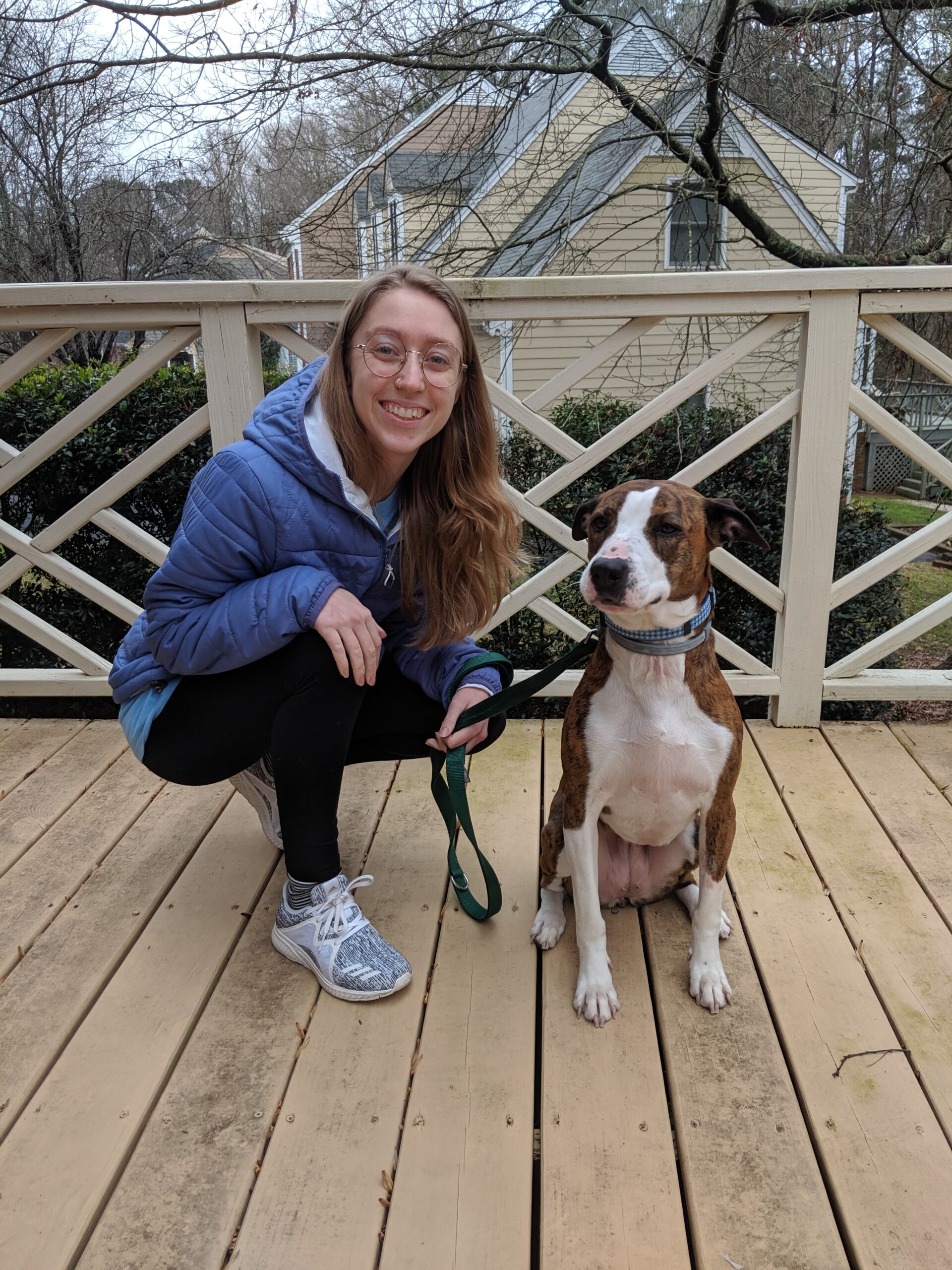 Erin has previously worked at Companion Veterinary Clinic in Alberta, Canada as a dog behaviour consultant and trainer, as well as her own practice in Nova Scotia, Canada.

After completing her MSc in Anthrozoology, Erin moved to New Zealand early in 2019 to complete her PhD at the University of Canterbury - New Zealand Centre for Human-Animal Studies.

Her research focuses on the ethics of the human-dog relationship and humane training practices.

In addition to working for Journey Dog Training, she runs the Merit Dog Project, a private behaviour consultation practice and education platform in Christchurch, New Zealand where she currently lives with her husband and their dog, Juno. 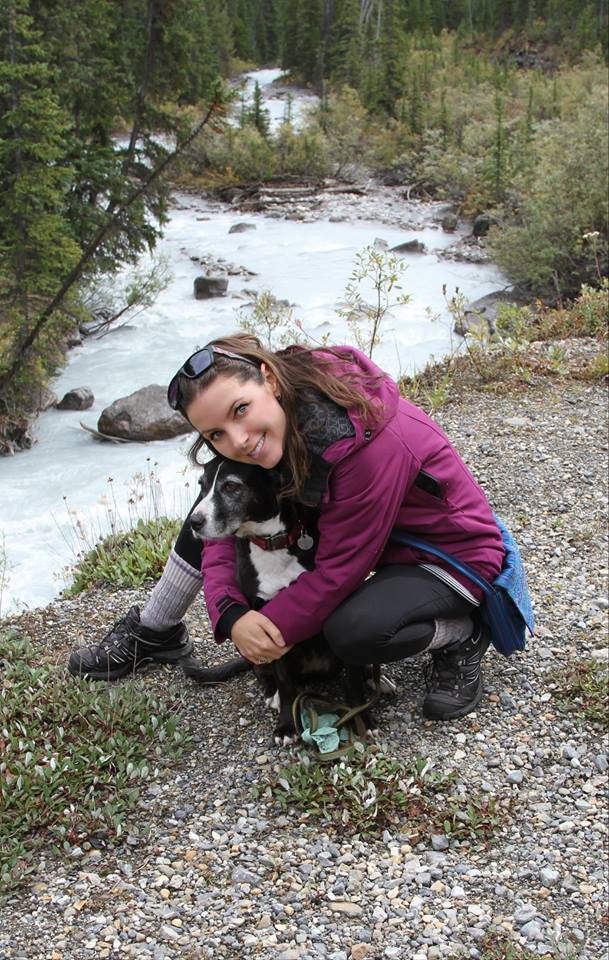 Tressa is a dog trainer and writer living in Northern California.

She earned her BA in Literature with an emphasis on Creative Writing in 2013. After graduating from college, she spent six months traveling around the United States in a van with her best friend. During this time, she decided to pursue a career working with animals.

Tressa got her start with positive reinforcement training working as a trainer at Unleashed by Petco while living in Southern California in 2015. Shortly after completing the Petco certification program, she enrolled in the Karen Pryor Academy Professionals program, where she earned her KPA certification in 2016 and learned an immense amount modern, science-based animal training.

At the end of 2016, she moved back to her hometown and started Path & Paw, a dog training and daycare business.

In 2018 she became a licensed Family Paws Parent Educator in order to better assist families in creating  safe and harmonious households with both dogs and children. At this time she was also hired by the Humane Society of Sonoma County as the Enrichment Coordinator, where she creates and implements fun activities and outings for the shelter dogs, to help relieve stress and boredom.

She also began teaching group training classes and workshops at the shelter and decided to phase out of daycare in order to focus on teaching, training, and working at the shelter.

She lives with her husband Evan,  a husky-mix named Koa, a former Tijuana street dog named Muchacho, and an adventurous cat named Dylan that also loves clicker training! When she’s not teaching or hanging out with shelter dogs, you can find her hiking with her dogs or reading books. 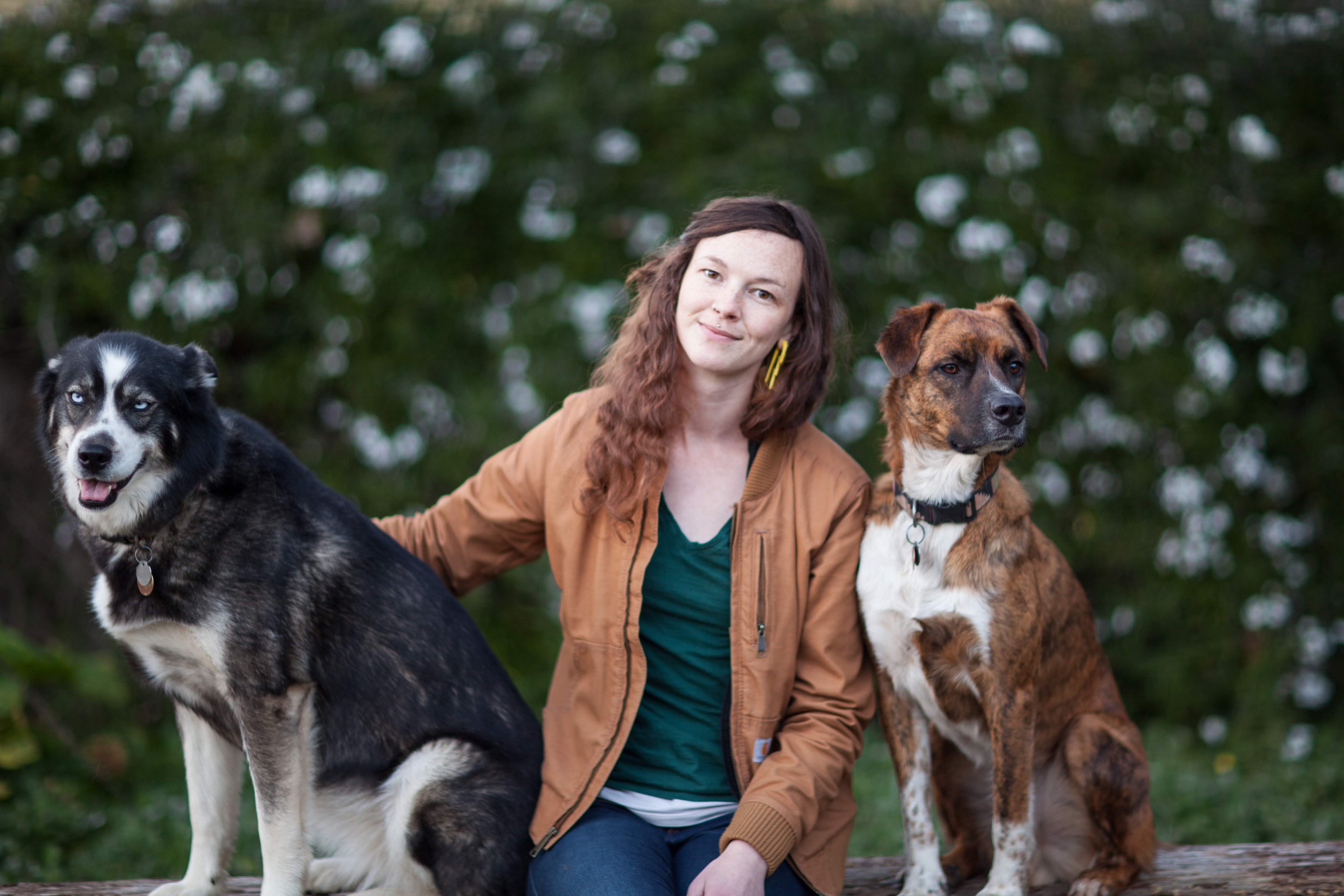 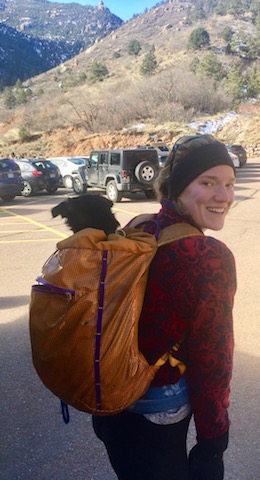 She graduated form Colorado College in 2017 with a degree in Music and works for the college as the music Paraprofession and "Official Department Dogwalker".

Kate is a rock climber and it was during an extended climbing trip that she met and fell in love with her rescue dog, Peanut. Now she spends her days boulder hopping with Peanut, developing new dog recipes, and eating a lot of said treats.

She began freelance writing in 2018 and loves helping people find the answers they need. Besides writing for Journey Dog Training, Kate is also a contributor for Terrain D.O.G. and loves writing about her adventures on her blog The Gobi Gazette. 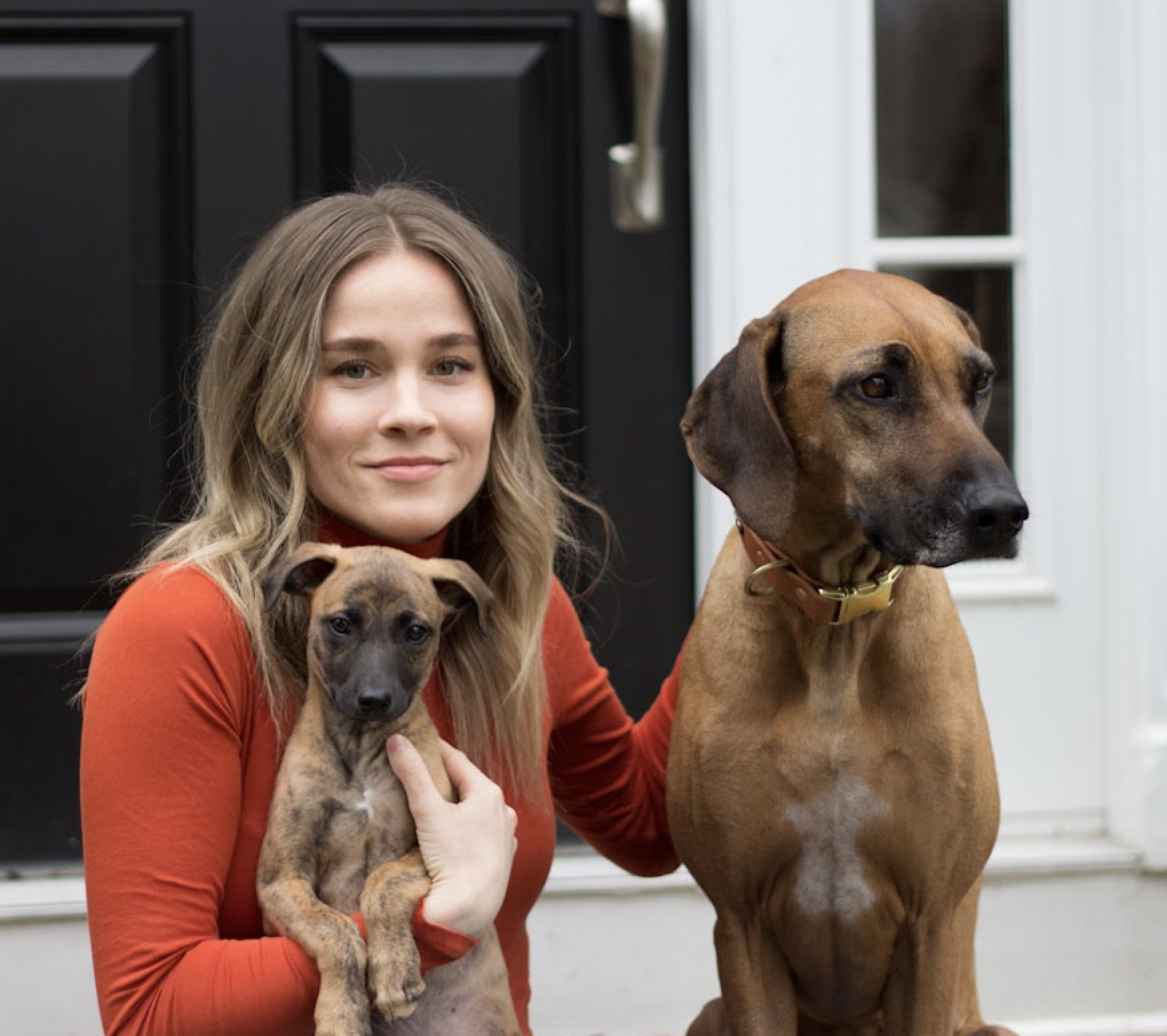 At the age of four, Alisa convinced her parents to get her a puppy. And that’s how a lifelong love of animals started. Then came horses, goats, cats, hamsters, birds, and lizards. In high school, she rescued a Papillon with fear issues, and discovered clicker training as a way to communicate more clearly with each other.

As an adult, Alisa was compelled to learn more about behavior modification when her dog, Samson, developed reactivity issues. Her Rhodesian Ridgeback, Ruby, pushed Alisa to continue sharpening her training skills, in pursuit of being a better agility teammate. The intersection of behavior science, dog sports and the human-canine relationship has been an exciting place to hang out and learn.

Alisa has had some unique opportunities to train animals. In high school, she volunteered at a wildlife center, training and caring for a variety of species including wallabies, fennec foxes and kookaburras. While living and working in Malawi, Africa, she volunteered at the local SPCA, using clicker training to teach dogs basic skills before they were adopted. And after relocating to the Chicago suburbs, she and Ruby volunteered with youth on probation, using positive reinforcement training as a way to illustrate and discuss topics of compassion and communication.

Originally from San Diego, Alisa currently lives in the Chicago suburbs with her husband, Kyle, and her two dogs, Ruby, a Rhodesian Ridgeback, and Lazlo, a Whippet. She is a Karen Pryor Academy Certified Training Partner. Agility is her true love, and she writes about the sport (among other dog training nerdery) on her blog, The Kindred Canine.

Barley is a seven-year-old border collie who was born in Colorado. We don't know much about his puppyhood, but we know he was purchased in a Walmart parking lot at about five or six weeks old.

Barley spent the first three years or so of his life with a family with three kids. When the man needed to move, he wasn't able to take Barley with him. He left Barley at Denver Dumb Friends League, where Kayla worked.

Kayla had been looking for a dog for a while, and Barley immediately stood out. He was a bit fat and his fur was tangled, but his eyes sparkled and he LOVED the ball Kayla threw. So she took him home.

Barley loves being a trainer's dog. He is excellent at diffusing aggressive and reactive dogs and is great at performing demonstration videos. He convinced Kayla to run her first marathon, and he does all of the training with her. 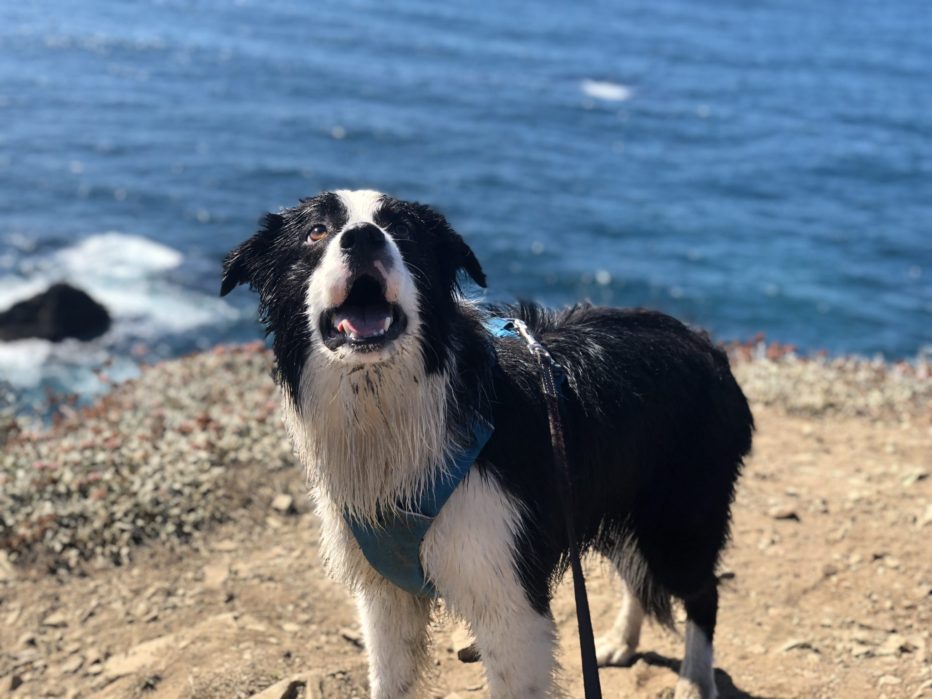 This website uses cookies to improve your experience while you navigate through the website. Out of these cookies, the cookies that are categorized as necessary are stored on your browser as they are essential for the working of basic functionalities of the website. We also use third-party cookies that help us analyze and understand how you use this website. These cookies will be stored in your browser only with your consent. You also have the option to opt-out of these cookies. But opting out of some of these cookies may have an effect on your browsing experience.
Necessary Always Enabled
Necessary cookies are absolutely essential for the website to function properly. This category only includes cookies that ensures basic functionalities and security features of the website. These cookies do not store any personal information.
Non-necessary
Any cookies that may not be particularly necessary for the website to function and is used specifically to collect user personal data via analytics, ads, other embedded contents are termed as non-necessary cookies. It is mandatory to procure user consent prior to running these cookies on your website.
SAVE & ACCEPT
Copy link
CopyCopied
Powered by Social Snap