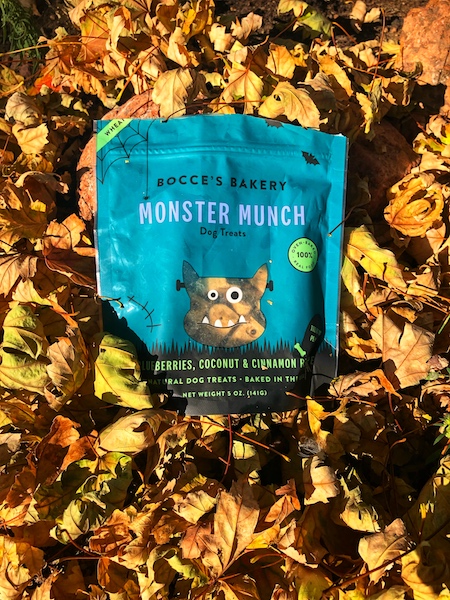 I know it is still only September, and I am embarrassed to admit this, but I have already begun thinking about Halloween!

I will say it seems like stores begin stocking holiday items earlier and earlier every year! Clearly I have been sucked in!

But I’m so glad that I was because I found a great treat and a company I am really excited about!

Based out of New York, Bocce’s was started out of desire to create all-natural, limited ingredient treats that are actually good for your pet.

The founder was shocked by how many preservatives, additives, and fillers are in so many common dog foods and treats and has been on a mission to create clean and delicious treats ever since.

About the Monster Munch Treats:

They have a huge variety of treats. You can find soft training treats, crunchy biscuits, treats for anxiety, treats for inflammation, grain free treats, meaty treats, jerkies, I mean the list goes on.

Everything was still really well priced. There is seriously something to satisfy every dog and pet parent out there!

I will be honest, I am not usually an impulse shopper. But there were two, well three really, things that just hooked me with this treat.

First off, the price. I found the Bocce Bakery treats at Target originally, and I don’t tend to be a big chain shopper, but it seemed like there were real people behind the creation of this treat, and I was definitely right!

Lots of small batch, boutique treats tend to put a real dent in your wallet, but these were only $2.99!

At first I figured there must be something wrong with them (as in full of horrible ingredients), but upon checking out the list I was amazed to see there are only five ingredients.

You read that right. Five. And no weird business: it is only oat flour, peanut butter, blueberries, coconut, and cinnamon.

Even some of the really high end, expensive treats I buy don’t have such a clean ingredient list!

This was the second thing that had me hooked and I definitely had to try them out. The third thing, as I mentioned above and must admit, was the cute and clever Halloween theme. I would have to give them a nod for effective marketing.

Once I got these treats home I was a bit nervous about how Peanut would respond. He is a picky eater after all, and the treats felt quite crunchy, which he tends to dislike.

The treats are shaped in the letter of a B and the texture was actually a lot lighter than I initially thought.

It is a dry and crunchy treat, but it isn’t hard like some dog biscuits are. I can easily break it into small pieces, and it doesn’t really crumble which I love.

I will admit, at first Peanut wasn’t sure. He took it and then dropped it on the floor. I had broken it in half, which I think was a bit too big for our trial run. He likes to take a little nibble first, to make sure it is good, so I broke it into an even smaller piece and tried again.

He tentatively took it and ate it! I gave him another piece and he was much more enthusiastic.

I decided to test them out while we are on a walk. Often the sights and smells are much more enticing to him than treats, so I know it is a good one if he turns his attention away from the squirrels and towards a treat.

When I put my hand into the treat pouch he immediately turned towards me and started bouncing to try and get in my hand.

I made him sit and gave him his treat. They are definitely walk approved, which is great.

What I Love About Bocce’s Bakery Monster Treats:

I am really pleased with this treat. It is limited ingredient, affordable, and Peanut approved.

These are all important factors, but beyond that it comes from real people making real strides to improve the health and well-being of pets.

I love the honesty and integrity in their ingredients and mission, but also in the price. So often “fancy” treats have such inflated price.

Bocce’s Bakery does a great job of making things affordable and accessible. Yes, I know you can find them in a big corporate store, but I think that is actually a good thing. More stores are making an effort to bring smaller companies to a big market. I am impressed to see a wider range of small business treats hitting big store shelves.

What I Don’t Love About Bocce’s Bakery Monster Munch Treats:

I think the only thing I wish there were more of were the actual treats! The bag is 5 ounces and it goes really quickly. I like a big bag to try and cut down on the number of packages I buy and to try and reduce waste.

I think it has been a while since I have been so satisfied with a dog treat.

The last time I went into a boutique pet store I walked out because I was shocked by the price and lack of variety.

Who knew the answer to all my treat needs would be waiting on a shelf! Definitely not where I normally buy dog treats, but now I will be on the prowl.

I would definitely urge you to give these fun Monster Munch treats a try. Better yet, try some of the other awesome looking treats from Bocce’s Bakery. I can’t wait to order some new varieties and test them out with Peanut.

I feel confident I will be spending my money on a quality product from a good company.