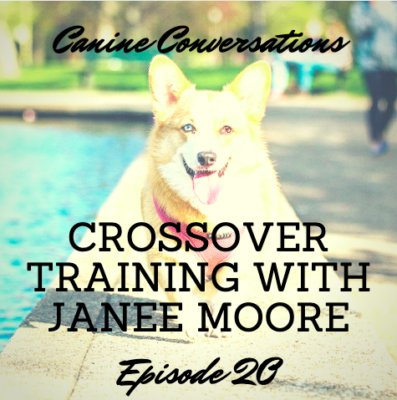 In dog training, there are two broad camps of training philosophy: those who train using aversive tools like prong or e-collars, and those who don’t. Of course, it’s more complicated than that… but it’s a big division in the field.

In this episode, Kayla sits down with her friend Janee More of Boise Dog Sports to talk about Janee’s process of switching from one training philosophy to the other.

A so-called crossover trainer is generally described as someone who started their dog training career using all of the tools available to them, but now relies much more heavily on positive reinforcement and environmental management rather than punishment.

“Things are very different when you stop punishing. Your entire perspective changes. You no longer look for opportunities for the dog to be wrong, but you have to start anticipating when the dog is going to be “wrong” and what you need to do to not only prevent that from occurring but build something else into it.

It’s multi-tasking. A lot of the guys struggle with this with reactive dogs. It’s no longer about waiting for the dog to react and punishing the reaction; it’s about catching the dog just before they’re about to react, interrupting that behaviour, asking for a different more compatible behaviour, then becoming aware of everything you could have done differently to have not had to interrupt the dog and set it up appropriately next time.

I also think this is why punishment based training is still so popular – it’s easier. You don’t have to read a dog as well or put much thought into your training plan and setting up a successful scenario.

In a way, punishment almost takes handler accountability out of the picture.

I think that’s another issue that people face, is not getting defensive when something could have been prevented, not because they have a bad or disobedient or unruly dog, but because they, as the handler, missed signs they shouldn’t have.

Positive reinforcement training forces us to look at ourselves in ways that are sometimes uncomfortable.”