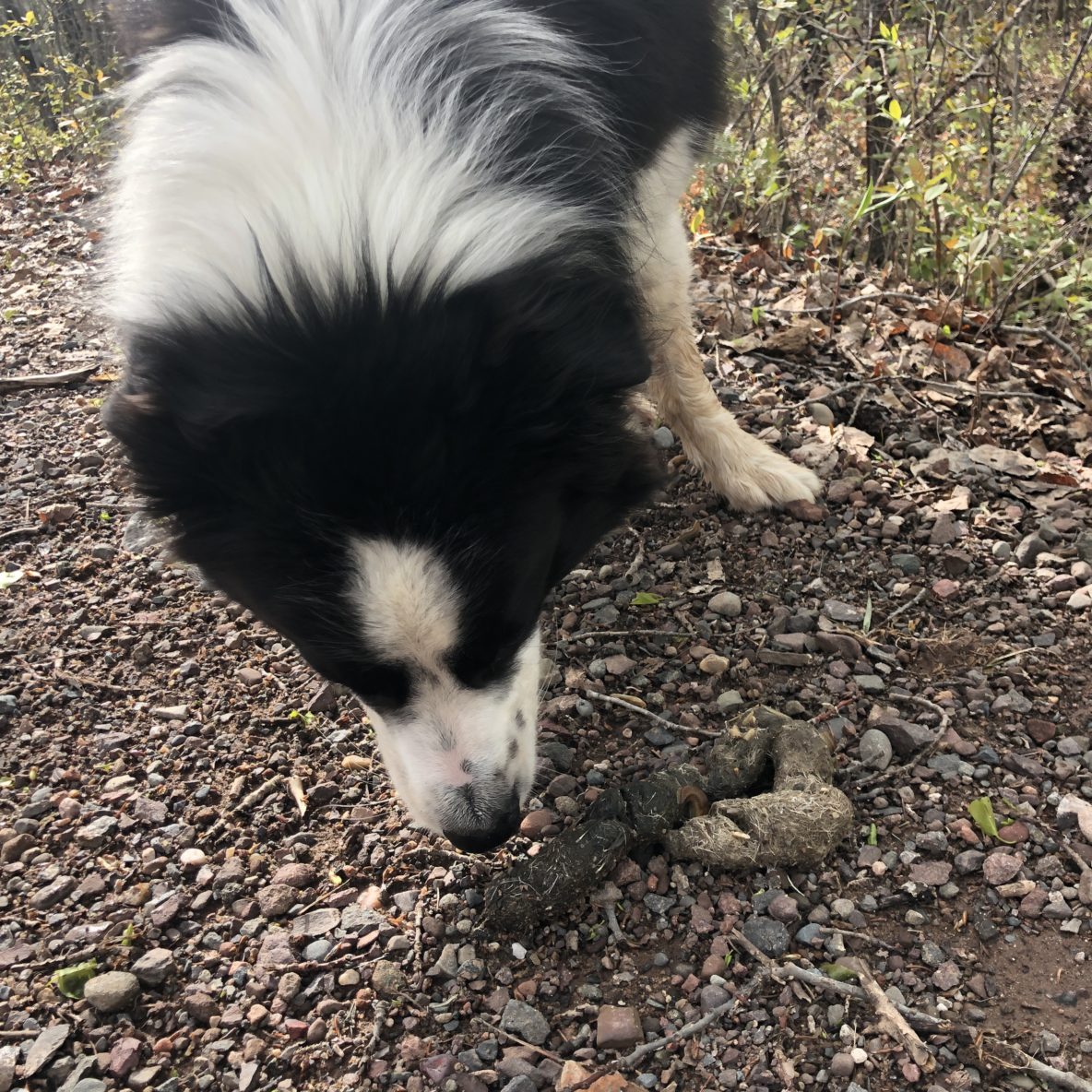 I recently accepted a position at Working Dogs for Conservation. I’m going to be the Communications and Outreach Coordinator there.

WD4C trains some of the world’s best conservation detection dogs. Their dogs will find the scat of endangered species like jaguars and snow leopards, invasive species like zebra mussels and spotted knapweed, contraband like ivory and bushmeat, and even the trails left by poachers. They’re all rescue dogs, pretty much saving the world.

My position means Barley and I are going to travel around the country (and maybe internationally) to work with rescues, donors, and other partners to teach them about conservation detection dogs. I’ll also be in charge of the website and social media, and I’m sure plenty of other tasks!

I’m very excited! As part of preparing for the job, I’m also getting Barley trained up as a useful member of the WD4C team. He’s going to be trained to find red fox scat.

I’m going to keep a training log here so you can see how this goes. Keep in mind that Barley is an incredibly motivated, smart dog who’s already got a very strong foundation in detection work. He’s already capable of finding birch oil, peanuts, and synthetic fox urine in areas as large as two football fields.

Be sure to check out my article on nosework if your dog is newer to detection work!

I started with a very simple setup: the fox scat in a container in the middle of an empty room. Barley entered, sniffed it. I immediately marked and threw his ball. We repeated 3-4x.

I then added several non-scented farm implements as easy distractors, then repeated – mark and reward with the ball when his nose hit the fox scat. One hidden fox scat. 3-4x.

I then held fox scat in one (gloved) hand and coyote in the other. Ball for picking the correct one. 3x.

I then started expanding the “search” area, hiding the fox scat in low, easy-to-find hides. We did this 1x with one hide, 1x with two hides, and 1x with three.

Finally, I added in one sample of coyote scat. We repeated with him only getting rewarded for fox scat 3x.

Then I opened the door, put the fox scat in the driveway, and did one outdoor search. 1x.

I’m totally blown away by how quickly Barley picked this up. I did NOT expect to get so far on day one! He’s the world’s most brilliant dog.

All of this training was less than a half hour.

Shorter session today. We did 3 searches, all off-leash.

I am SO PROUD of this dog. We had a great midday session today, and I’m just over the moon with how quickly he’s picking everything up.

We did two searches today. It’s bright, sunny, and windy. I put Barley in the car to wait while I hid two samples. One went out behind the barn in the long grass right between the raspberry bushes and the path. The other I hid out in the field. He nailed both of them with ease – too fast! It was nice and windy, which helped.

The second search, I placed a single sample inside of a tree cage about 10 feet off of the path by the pond. I took Barley out on a long route towards it, basically tracing a circle with the hide at the farthest end. He was nice and focused, catching the scent pretty easily. I had spotted a weird piece of fur earlier, so I also took our trajectory past that. It looked like mouse or maybe a young rabbit. Barley investigated closely, but ultimately didn’t alert.

I don’t know if this fur flap was fox-related (it looked possible). I’m pleased, though – I think he did the right thing. Showed a lot of interest, but ultimately decided it wasn’t quite right and moved on.

I then did an evening session on Facebook Live. I filmed vertically, so the video is best viewed in full-screen. Sorry about that!

He totally blew me away AGAIN with how fast he was! Just watch the video, you’ll see.

We did several sessions today. We did one along the driveway (which is about 1/3 mile long). I asked him to search all the way down the driveway, and actually hid the scat while he searched ahead of me. That allowed me to get him to work about 2/3 of a mile before he found his first hide.

I did another session out in the tall grass where I found the original samples, hoping we might find some more than what I’d hidden. No such luck. He was still fast and efficient, though.

So far, my only complaint about Barley is that he does look up at me and check back in more than I’d like. I’m hoping his independence will build as he gets more confident.

We did two more searches out at a boat landing. Both times here, I removed the scat from the containers so that it was on the ground. I did this because in the earlier search today, I suspect he actually saw the plastic bag. I also don’t want him learning to search for “fox scent + plastic.”

Both of those searches went well. We did one last search of the night at the house. This one, again, had two hides, both outside of their containers. He nailed both of them.

Then an interesting thing happened. He alerted to a pile of willow branches. I cued him to keep searching three times, and each time he insisted there was something in the branches. I couldn’t find it with my phone light. So I gave him one toss of the ball and we kept moving.

I’m not quite sure what happened there. Maybe my dad stepped in fox scat while he stacked those branches. Maybe a fox peed on the branches. Maybe Barley was just tired. My instinct is to NOT reward if I don’t see scat – but he was so insistent and he’s still so new to training that I gave just one toss of the ball. I need to ask some other handlers what they’d suggest doing.

I’d like to get some fox scat collected from a different individual. I worry that all of our samples are likely from the same fox right now! They’re also similarly aged.

I left a sample out overnight beneath the apple tree.

We did one search right away in the morning. I walked Barley down the driveway (about 2/3 mile down and back), knowing the sample was near the apple tree by the garage. So Barley had to look for 2/3 of a mile before we were near the sample. He found it no problem!

Weirdly, he later alerted to that scrap of mouse fur that he ignored on Day 3. I didn’t reward him for that. Definitely feeling the need to have more samples and perhaps controlling the search environment so he doesn’t run into things like fox urine or fox kills?

Later that day, I took Barley up to Mount Ashwabay Ski area. We were going to just head out for a hike, but about 1.5 miles into the hike I couldn’t resist.

So I told him “Find the fox,” and his nose went down and his tail went up.

We hiked that way for about a mile. He came back to check in with me more than I’d like, but he headed out again to keep looking when I cued him.

I was starting to worry that I’d made the wrong choice – he was looking tired, he was coming back to check in a lot, and I wasn’t sure if he’d find a sample. I didn’t have one with me to plant.

After about 1.2 miles, he started showing a lot of interest in an area. He’d already done that a few times elsewhere. I walked over to check – like I did everywhere else he seemed interested.

And I saw it – a little pile of scat nestled in the grass where he was looking. He didn’t alert to it, but next time he put his nose near it I praised and threw his stick.

I praised like crazy! We threw a huge party!

He seemed a bit confused. But he got the stick, so he was happy.

I used a bunch of old oak leaves to collect the sample. I planted it a few more times along the trail, but he interestingly missed it two out of three times. I’m not sure if he’s just confused or if he was exhausted.

We headed home. I am ecstatic! The samples he’s been working on are probably all from the same individual, so I’m really pleased that he found a different sample. Now we’ve got four scats to work with from two individuals.

After he napped and ate dinner, I did a few training sessions using the new sample. He alerted to it really nicely once he was rested and, presumably, thinking more clearly.

I am one proud dog trainer.

Ep. 10: What Behavior Consultants Can Learn from Sport Dog Trainers

In this episode, Kayla speaks to Sarah Stremming from The Cognitive Canine about what dog behavior consultants can learn from...