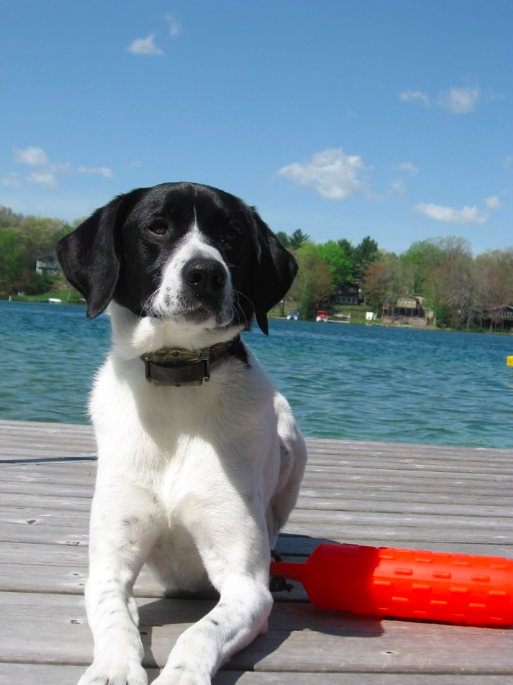 One of the main questions, when people are considering using a shock collar, is whether or not these training collars will hurt their dogs.

Modern shock collars often have up to 100 different levels of shock (or stimulation) for your dog. These shocks range from quite mild to pretty serious.

Anything that stops or reduces behavior is, by definition, punishment.

Generally, a punishment must be startling, annoying, uncomfortable, or painful.

Unfortunately, many dogs also get used to these shocks. So while a mild zap on 10/100 might stop your dog the first few times from chasing a squirrel, over time he’s likely to habituate and you’ll find yourself cranking the dial or even purchasing a stronger shock collar.

Ok, But What Research Has Been Done?

An interesting study from 2003 looked at whether or not shock collars are painful for dogs. Sophia Yin wrote an excellent breakdown that I’ll summarize here.

But Trainers Say They Test Shock On Themselves!

Many e-collar trainers will say they’ve tested the shock levels on themselves, and it’s not so bad. They don’t say what level of shock.

There’s also a huge difference between testing a shock on yourself and having it imposed on you when you’re not expecting it.

Here’s an example: I don’t really mind donating blood. Sure, it’s a big needle. But I know it’s coming, and I’m ready. I signed up for this! I’d say that it’s not so bad. But if you jabbed me with a needle every time I J-walked, I’d probably have a very different perception of that pain.

I’d also probably want to hit you or hide from you.

It’s quite likely that the same is true for our dogs. While a shock collar might not feel so bad when you test it on yourself, it will likely feel quite different for your dog when it’s coming unexpectedly!

If your dog’s behavior isn’t changing over time, then you’re not really using the shock collar correctly. That doesn’t mean it’s not painful – it just means your timing or intensity is off.

Because a shock collar, in order to work, must be at least irritating and at worst painful, we don’t recommend using them in training.

If you get the timing wrong with a correction, you might startle, upset, or hurt your dog unnecessarily. Your dog might learn that other dogs, guests or even your presence = shock.

This can lead to all sorts of unwanted behaviors, from fear and avoidance to aggression.

If your shocks are too strong, they might be downright painful. If they’re too light, your dog might learn to ignore them over time as you gradually increase shock level.

But I Can’t Walk My Dog Safely Without A Shock Collar!

If you truly feel like walking your dog without an e-collar safely, then I urge you to seek help from a SKILLED positive-reinforcement based trainer who can help you learn other, more effective, ways to teach your dog to walk safely.

Because if the shock collar was working to actually TEACH your dog, you wouldn’t need it anymore. Instead, it’s the threat of the e-collar that’s keeping your dog tame (not actual learning of a new skill).

I also have a blog on teaching your dog to walk off-leash without an e-collar that you’ll find helpful. Hannah Brannigan’s latest podcast series on loose leash walking will be helpful, too.

But… Shock Collars Work. So What’s the Issue?

Shock collars often get the result that the trainer is looking for: the dog stops what he was doing.

That makes it feel REALLY good to use a shock collar! You feel powerful! Your dog is responding! Look at that obedience! Great!

But, as we talked about above, at what cost? Your dog isn’t enjoying training. And wouldn’t you rather learn in a way that there’s one thing to do that’s good, versus lots of “dangerous” mistakes to make?

If the fact that your dog doesn’t like training doesn’t bug you, that’s ok. I respect your utilitarian thought process (I’m utilitarian to a fault, according to some friends). But shocking your dog can have all sorts of fallout.

Sure, your dog stopped lunging at other dogs. But now he pins his ears and hides behind you when they approach. Does he actually feel better about other dogs? Nope!

In many cases, shock collars get fast results. But they often don’t last, because shock collars don’t treat the root of the problem. If your dog growls at kids because he’s scared or lunges at other dogs because he wants to play, the shock just scares him into stopping. But it doesn’t teach him how to behave instead, or how to feel instead.

The thing is, caring about your dog’s emotional wellbeing isn’t just so you can feel good about yourself. It’s how to make your training more effective and efficient.

Don’t fall for the “quick fix” and flashy stop-in-your tracks results of a shock collar. It’s just not worth it. And if you don’t know how to fix something without an e-collar, reach out! I’d be thrilled to help you brainstorm other options.

The fact is, shock collars are already banned in several countries. That’s because they’re risky to use. A highly skilled trainer can certainly use them without fallout – but it’s difficult!

Check out further reading on e-collars from the American Veterinary Society of Animal Behavior. They are real animal behavior experts.

Instead of using a shock collar, I recommend teaching your dog what to do instead. Reach out to me on Facebook or Instagram and I’ll give you tips for your specific problem.