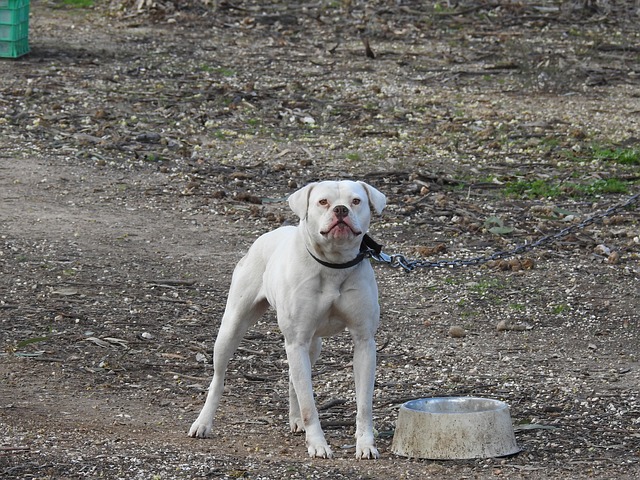 I run marathons – and my dog Barley joins me on nearly every single training run. While I spent 2018/19 traveling through 18 states and 8 countries, running with Barley was my main form of exercise (and my main hobby).

Suffice it to say, we’ve been charged by a lot of off-leash dogs.

I’ve learned a lot through all of these encounters, putting to practice things that I’ve learned as a professional dog trainer. Let’s run through some scenarios to see what your options are when you and your dog are charged by a dog.

Step One is Always The Same: Assess the Situation (Fast!)

The first thing to do in any of these scenarios is to assess the situation: is the dog tied down or behind a fence? Is there an owner running haplessly behind calling out that he’s friendly?

Even more importantly, assess the dogs’ body language. Most charging dogs fall into one of three categories.

Thanks to my chosen profession, I’m somewhat of an expert in dog body language.

No, I haven’t written a book on the subject – but I’ve educated countless of owners on the topic and I’ve spent more hours than I care to admit studying dogs in shelters, in classes, in books, in video, and in person.

You probably don’t have my experience with body language, so use the barking and bounciness as two signs to look for.

Again, in general, rapid-fire, staccato barking is coming from a dog who just wants you AWAY, but doesn’t really want a fight.

A silent, direct approach is quite serious. A bouncy, goofy approach is downright rude – but probably not a direct threat to you and your dog.

Once you have an idea of what the dog’s intentions may be, it’s also important to keep your own dog in mind.

I know this about him, so I know that even a rude, bouncy approach or a bluff charge isn’t likely to be a big deal. I still will take steps to protect Barley (so he doesn’t feel the need to step in on his own), but it’s not likely that he’s going to be the problem here.

If your dog isn’t copasetic with other dogs, your steps to handle each situation may differ from how someone with a basically friendly dog may proceed. I’ll cover your options below.

In all scenarios, if you can simply cross the street, duck behind a gate, or double back the way you came, do so.

Let’s be honest, this is probably the most common scenario: you and your dog are walking or jogging and are charged by a dog. You have your leash, your phone, and… not much else.

Some solutions rely on you having treats, so consider treats part of your bare-bones dog-walking kit (like poop bags and a leash). I walk with my treat pouch, and I tuck Marsh Dog treats into my running belt.

If your dog is aggressive or highly fearful of other dogs, consider muzzling your dog and carrying some of the tools described below.

I’ve mapped out your options based on the different combinations of your dog’s and the oncoming dog’s personalities.

How to Prepare Yourself and Your Dog for a Charging Dog

Let’s face it: some of us have rotten luck with charging dogs, and others of us live in areas where it seems that no one has heard of a leash or real fence (underground fences just don’t count).

Obviously, if you know there’s a problem area, just avoid it. No, it’s not fair that your shy dog can’t enjoy the same walking path as the other dogs.

But using the trail when charging dogs constantly stress out your dog isn’t helping anyone.

If you know that there’s a possibility of being charged by dogs and you can’t just avoid the area, it’s smart to put together a little go-kit for yourself. This doesn’t have to be much, but it can make a big difference.

Aside from treats and a muzzle if your dog may benefit from one, the number one thing to carry if you’re worried about being charged by off-leash dogs is citronella spray.

Unlike most pepper sprays, citronella spray comes out in a concentrated stream (which means it’s easy to aim). It’s cheaper than pepper spray and is far less painful or harmful for the oncoming dog – but nonetheless very effective.

I hate to admit it, but I’ve used citronella spray on dozens and dozens of dogs – mostly strays in Latin America.

I use Spray Shield. I either clip it to my treat pouch for walks, or use a hairband to attach it to my waist leash for jogs.

I’ve used my fair share of other techniques to stop charging dogs, but I’ve found citronella spray is my favorite tool by far.

In Latin America, you can usually scatter stray dogs by simply bending down as if you’re going to pick up a rock. That was useful – but not likely to work in most of the United States.

I used pepper spray on a pack of stray dogs in Ensenada, Mexico once (I had run out of spray shield and chose to bring the pepper spray instead of going without anything). It stopped the dogs, alright.

But it also was clearly very painful for them, and I felt rotten about it. I haven’t noticed the intensity same pain-based responses in dogs I hit with citronella.

Worse, I also got some pepper spray onto my hand, which ultimately ended up on my brow when I mopped up some sweat, and into my eye. Huge mistake! You probably don’t need or want pepper spray. Citronella is more accurate to use and does the trick in my experience.

What NOT to Do When Charged by a Dog

My Go-To Tactics for Dealing With Charging Dogs

Last night, I had the opportunity to practice my two go-to techniques when I’m unprepared.

I headed out on a jog while traveling in Washington. My citronella spray lay in my drawer in Montana. If I’d had citronella, I certainly would have used it.

We were charged first by a little Mexican Hairless Terrier – clearly a Blustery Bluffer. The dog was terrified but followed us out into the street all the same. At first, I ignored and kept jogging, but Barley was clearly a bit worried (glancing over his shoulder, hackles up, ears pinned) and the little bugger was following us more than I’d like.

So I told Barley to “wait,” then turned and stepped quickly directly toward the dog. He backed up, ears pinned, and kept barking. I took a few more steps, and the dog turned tail and ran.

A few houses later, I heard some deep, booming barks. A Dutch shepherd streaked into the road, hackles up, standing on his tippy-toes.

I dropped Barley’s leash, recognizing that this dog wasn’t likely to stop 5-10 feet from us. I didn’t have a way to stop the dog from reaching us, so I figured it would be most fair for Barley to navigate this socially. I had his back!

I baby-talked the dogs while the Dutchie rudely put his neck over Barley’s back, his hackles up. Barley looked very tense, but I kept happy-baby-talking to him, telling him how good he was.

After a few seconds, I called Barley away and stepped towards the pair to split them up a bit. The Dutchie backed off and Barley came to me.

The owners called from their lawnchairs, “Is that dog a girl?”

I replied no, and they said, “Weird, he’s never that nice to boy dogs!”

As I said, don’t bother with the owners… I’m glad Barley and I were somehow able to diffuse the situation.

If it had escalated, I didn’t have much on me to break up a dog fight. I probably would have attempted to break up the fight with my voice first (I have quite a yell, and that’s worked for me with many minor fights).

I try everything I can to break up the fight quickly without getting my hands involved. See this article for more info on breaking up dog fights.