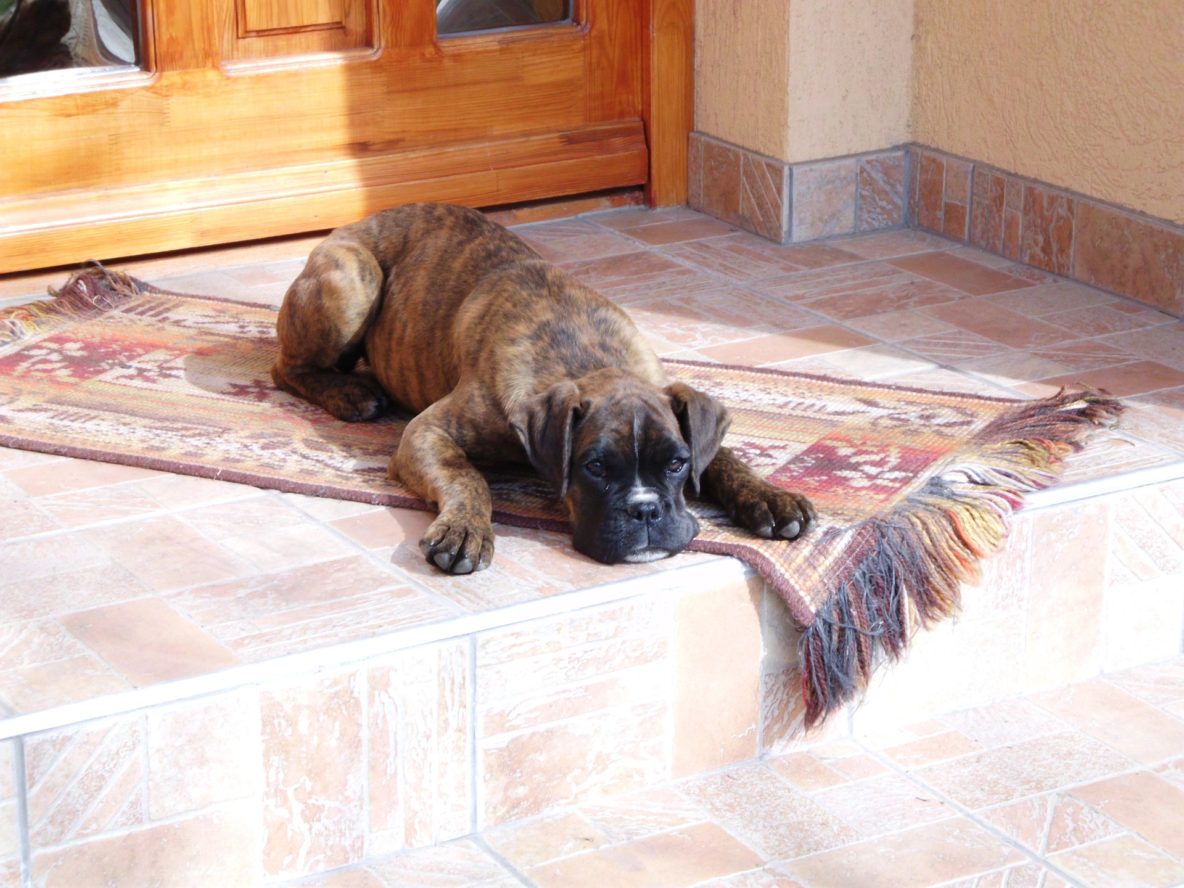 We brought home a five-week-old puppy last night. Brindle, stubby-legged, and smoosh-faced, Mia the boxer puppy toddled around our apartment whimpering. A Good Samaritan purchased her in a parking lot but wanted her to be cared for, so he or she brought her to the shelter. When I knelt to meet Mia in her kennel, she groveled and screamed, frightened of me. I decided to take her home for the night for a bit of TLC since her actual foster family couldn’t take her until the next day.

Barley, our four-year-old border collie, did not seem happy. He stared at his toys, lip licking and yawning as Mia started to bounce and play bow and paw at things. If she crawled under him to paw at his legs or nip at his belly fur, he moved away with a short deep growl. As she approached his Kong Wobbler, he lifted his lips into a fantastic display of his teeth. This was not going well.

A note: for the purpose of this article, I’m focusing on Barley, not Mia. While Mia was in the midst of a very important developmental period of her life, she was apparently confident around other dogs (not so much with people) and unphased with Barley. Part of teaching him to be calm around her was for her benefit as well. In real life, it’s imperative to balance both dogs and their needs.

→ If your dogs aren’t getting along, get extra help with our e-book, Practical Solutions for Aggressive Dogs.

You might also want to check out our archive of posts on dog-dog relationships or aggression in dogs. You’ll find lots of great info there!

Caught off guard by the first growl, I overreacted. I yelled a sharp, loud “Hey!” and glared at Barley. He lay down, lip licking, and put his head on his paws, holding soft eye contact with a furrow in his brows. Mia continued toddling about, unphased by my rudeness.

An important note here: puppies, especially very young ones, are often terrible at reading human and dog body language. An older dog likely would have noticed Barley’s canines and backed off. A 5 week old puppy did not. That’s why management is so important for the safety of young puppies.

I immediately recognized my error, but the fear and emotion made it hard to remedy. I knew that punishing Barley by yelling at him would only make him more uncomfortable with the puppy. This would further hurt our chances of successfully bringing home a puppy later on.

I needed to take a step back from my emotional, reactionary state. Barley’s lip-lifting was concerning enough. We didn’t want it going further and potentially scaring or harming Mia. I also didn’t want Barley to suppress his emotions and let Mia torment him if she made him uncomfortable. We needed a game plan to help Barley and Mia get along for the next 24 hours.

I took a moment to run through my mental “dangerous dog scoresheet” (you can fill one out for free here), and decided that the situation was under control.

I also needed to make sure that I didn’t just give up, calling Barley aggressive, or dominant. Labeling him wouldn’t help our future training!

I took Barley for a long walk to think. We had zero intention of keeping Mia, but we do want to bring home a puppy in two to five years. Barley has successfully shared space with puppies as young as four or five months and recently spent a week cohabitating with an eight-month-old golden retriever. His original owner also had a year old husky, so I assumed he had some puppy experience.

But we needed a plan for tonight, and eventually would need a long-term plan if my hopes of getting another puppy were to pan out. 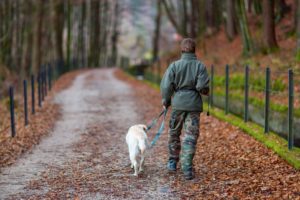 Walks are a great time to think and calm down for both parties. We both needed to stop reacting emotionally to the situation.

What To Do If Your Adult Dog is Uncomfortable With Puppies

After our walk and a bit of Frisbee, I had a bit of a game plan. I technically had the option to just totally separate the two dogs for the next twelve hours, but I wanted to use this as a learning opportunity for me and Barley.

I often struggle with my emotional response to unexpected setbacks, and Barley clearly needed some good experiences with a puppy. Rather than putting off that experience creation until Barley is six to nine and is even more set in his ways, I wanted to do a bit of training for Barley now. Waiting until we actually purchase or adopt a puppy will just set Barley up for weeks, months, or years of stress because he is unprepared and has no way out.

We had three main goals for the next twelve hours.

It’s important to recognize that I didn’t just allow the dogs to “work it out.” That was far too dangerous for Mia and was likely to teach Barley that overt aggression or avoidance was the best strategy for dealing with puppies.

If I were more concerned about Barley, I would have spent more time with them separated, used a leash or muzzle, or even abandoned the training altogether. We also ensured that we set the dogs up for success by keeping them separate 90% of the time that Mia was in our home after the initial unfortunate greeting. 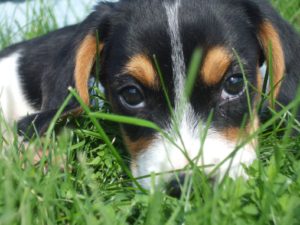 It’s not fair to the puppy to let an adult dog who doesn’t like puppies scare or hurt her. Safety is top priority!

Training an Older Dog to Tolerate a Puppy

Like most training, changing a dog’s opinion about something (which was essentially my goal) is best done in short training sessions. I kept the dogs mostly separate and played calming music to soothe both their nerves.

Over the course of twelve hours, I did several training sessions with Mia and Barley. Each training session was just about 1 minute long and there was generally at least a half hour between sessions. Here they are.

The important thing to notice about this approach is the multiple short training sessions, the emphasis on safety and comfort for both dogs, and the rapid-fire reward-based training. We didn’t actually get to a place where Barley and Mia could cohabitate in 12 hours. However, we did move from Barley totally avoiding Mia and growling if she approached to Barley calmly watching her approach him and taking treats from me.

→ Get personalized, one-on-one help for your dog and puppy with one of our different online dog training options. 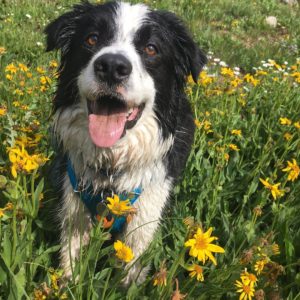 Barley needs more practice to be a dog that does like puppies! For now, we’ll enjoy our one-on-one time with interspersed training.

If we had more time, Barley would soon learn that tolerating Mia meant treats (aka, Mia is a good thing) and that he could always escape her if he wanted. We never forced him to interact. If he growled or moved away, we let him do so.

If and when we bring home another dog, we’ll do a similar protocol. We’ll do lots of parallel walks, give the dogs plenty of breaks, and help interrupt tense situations without scaring or punishing the dogs.

The good news is that we can definitely survive a few weeks of careful monitoring with a young puppy. Puppies eventually turn into adults!

In the meantime, it’s abundantly clear to me that I need to find some friends with puppies so that Barley can keep learning to be comfortable around the scary babies!

If you need more help with a dog that’s aggressive towards puppies (or simply uncomfortable), check out our online training options.