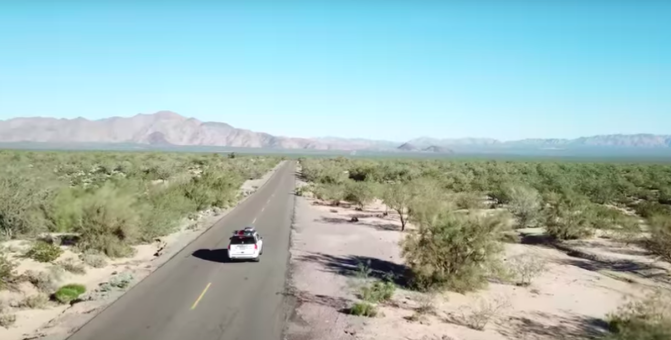 We left Ensenada on Friday, expecting a somewhat long afternoon of driving. I curled up in the back seat and went to sleep, per usual. But after dinner, things got a bit crazy.

There was a surprise great horned owl, a cliffed-out road, potholes that could swallow a buffalo, nausea, and more.

Let me just say that I’m really glad that both Kayla and Andrew are really comfortable on bad roads. All of those block breaks at Colorado College driving over Colorado mountain passes, through abandoned public lands on old mining roads, and up sketchy climbing access roads in an old Honda Civic really helped prepare them for Mexican driving.

After I last wrote, Kayla and I headed out for a six mile run along the beach. The Ensenada beach, Playa Hermosa, stretches for at least 3 miles along the edge of the city. It’s clean, with soft sand and very few people.

Kayla let me run loose, and I spent an hour of my life sprinting after waves and chasing plovers. I met a few nice dogs and avoided a few not-so-nice ones.

It was one of the best runs of my life. Makes up for our first run!

That evening, the humans “celebrated” Halloween with some mezcal, fish, and a sunset on the roof. I can’t climb ladders, so I just sat at the bottom of the stairs and waited.

The next day was Día de los Muertos, or Day of the Dead. We’re so far north that it’s really not that big of a deal up here, but our host Esther still told Andrew and Kayla where to find a celebration.

They worked from home with me all day, then left me with a chewie and headed out into the night.

They headed to a mezcalería in a hip little part of town.

There, they met with their AirBnb host. She introduced them to the bartender and showed them around the little altar. People had photos of their loved ones who are dead, including a little altar for pets. People shared sweets, drank, and offered up little trinkets to the dead. Andrew and Kayla had a beautiful night of tasting mezcal and remembering loved ones.

The Drive Down Baja California

On Friday, the humans did another half-day of work. They both work so much! Not enough beaching, in my opinion. Although I guess we’ve been to the ocean every day so far.

We packed up around 1 pm and headed out. Kayla almost forgot her water bottle, so we had to backtrack.

But then we were on the road!

It was gorgeous. Winding desert highways, sprinkled with saguaros and these crazy trees called Boojums (Fouquieria columnaris). Up until the town of San Felipe, the roads were decently paved.

We stopped for dinner in San Felipe. Andrew’s stomach was really starting to bug him, so Kayla took over driving as we headed off into the night.

Shortly after San Felipe, the road started getting worse and worse.

I woke up to jostling over and over as Kayla slowed, swore, and swerved her way down the “highway.” There were giant chunks of the road missing, like a cookie monster had taken a bite from the road. These were usually marked with a few traffic cones – but not always.

Other places, there was simply a row of traffic cones across the whole road with an arrow pointing off to the side. Kayla dutifully followed these detours across rough, bumpy gravel streaks. They weren’t even really roads. Just a strip of the desert that someone decided was a detour.

At some point, the pavement just gave way to gravel. It was dark. Andrew looked pasty and Kayla was starting to look a little red-eyed.

After a while of this, Kayla noticed that there was another road to the right. When there was a chance, she switched over to that road. It was wider and slightly less bumpy, but still definitely gravel.

A great horned owl flew up at one point, making Kayla yelp as it soared across the windshield, unhurt. Mere seconds later, Andrew spoke up, a slight note of panic in his voice, “Stop, stop, stop!”

The tires skidded a bit as Kayla did, but luckily we weren’t going all that fast.

Our headlights shone out into nothingness. The road gave way ahead of us, leaving a gulf that was probably as high as a second-story window.

The road simply dead-ended into thin air. No cones, no warning.

Kayla did some deep breathing and backed the car away, turning onto the thinner and bumpier road again.

We arrived at our campsite around 8:30 or 9 pm that night, swearing never to drive at night again for the rest of this trip.

The humans set up the tent on the beach at Campo Beluga. I fell asleep curled on the sand outside the tent, then asked to be let in and curled up at Kayla’s feet for the rest of the night.

Kayla and I woke up early to enjoy the sunrise. We went for a six mile run along the beach, loving every step of the way.

The rest of the day, Andrew was still pretty sick. Kayla did much of the driving.

We meant to stop at Tres Virgenes, a trio of volcanos about 2/3 of the way down Baja California – but Andrew was simply too sick to hike. So we drove on.

We found a little cove full of Gringos in a well-established campground. The humans got dinner, I went swimming, and we went back to bed.

Kayla tossed and turned all night (so did Andrew). She got up in the middle of the night, twice. She looked like junk (and smelled terrible, too).

The sunrise in the morning was amazing. I played in the water more while Andrew and Kayla moaned, groaned, and picked up camp.

Andrew didn’t feel much better on Sunday, so they took turns driving and moaning. Around mid-morning, Andrew perked up a bit. Good timing, because Kayla’s food poisoning hit full swing not long after.

She spent the rest of the drive curled up in the front seat, asleep. Andrew still had a gnarly headache, but he took over driving.

We arrived in La Paz looking pretty patchy – except for me. I still felt great! I was ready to go swimming and play tug and find hidden scents and practice my tricks and play frisbee and go running and go swimming and… but they weren’t.

Kayla pretty much slept from 2 pm until 6 pm, and then they went out to find some bland food. They went back to sleep right away when they returned.

But on Monday, everyone seemed better!

We are back to our normal schedule of visiting the beach, going for runs, playing training games, and them working while I sleep and wish they’d come home.