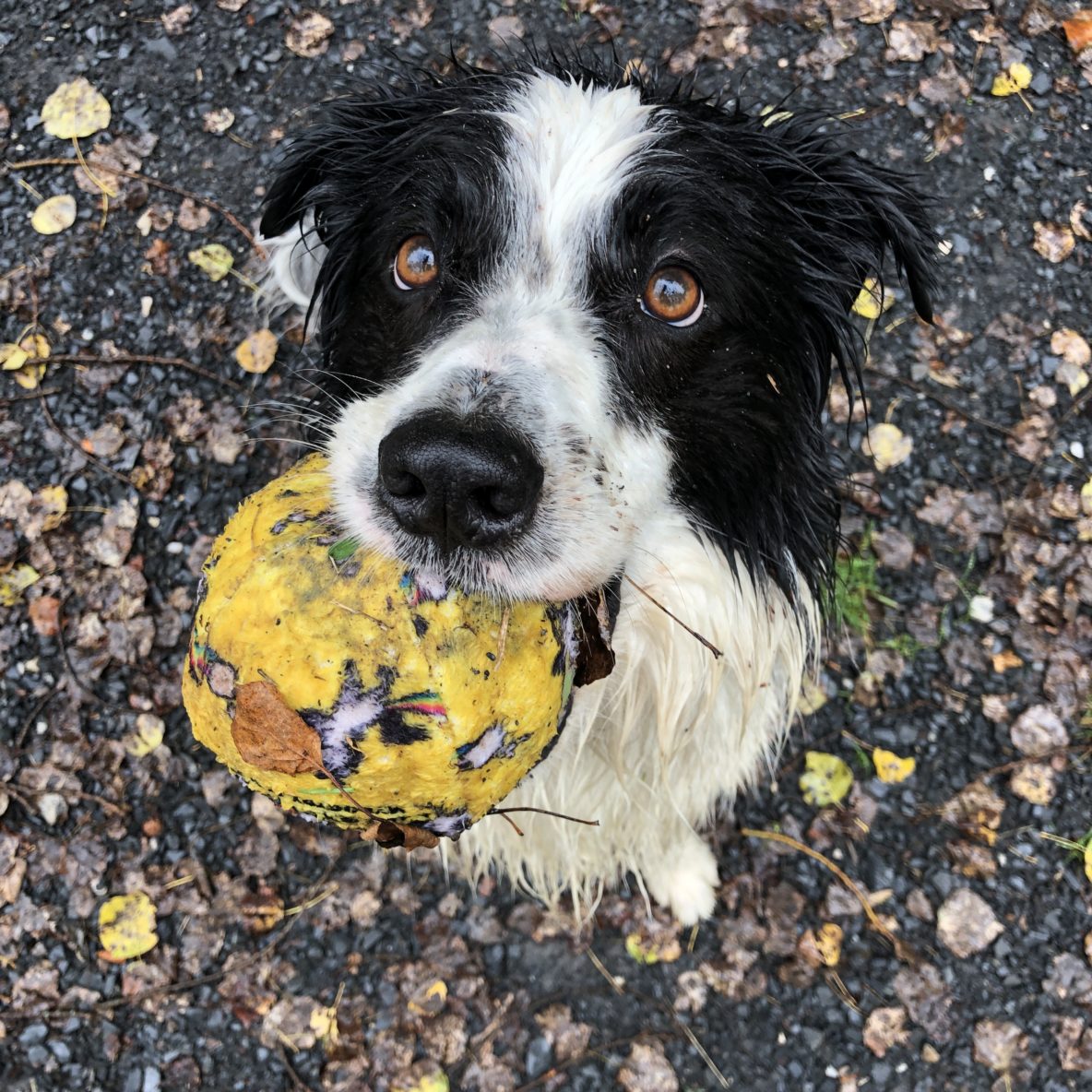 Some dogs are born loving to play fetch. Others might love toys, but don’t really seem to understand the point of fetch. They’ll chase the toy, sure, but they really want to prance around with it and play keepaway instead of fetch.

If you really want to play fetch with your pup, this is a problem! But it’s not impossible to teach a dog to play fetch instead of keepaway.

(Note: for this article, I’m assuming you just want to play a game with your dog, not teach a formal obedience retrieve).

One of the first things I ask owners who come to me with this problem is this: What is your goal with fetch with your dog?

In many cases, there’s nothing wrong with playing keepaway in order to hit these goals! That’s right… if you really just want to play a game with your dog, spend time outside, and have some fun, you can just play keepaway.

Is Fetch Fun for YOUR Dog?

Some dogs don’t play fetch because they don’t understand the rules of the game yet. But many dogs don’t like to drop the ball and give it to us because the game we’re trying to make them play just isn’t very fun for them.

For example, I often see owners demanding that their dog deliver the ball to their hand, sit and wait between each throw of the ball. It looks a lot more like a military drill than a game, and both the dog and person appears frustrated.

I understand if you don’t want to play keepaway, that’s fine. But think about the fact that if your dog really likes that game, maybe we oughta meet in the middle!

Consider a flirt pole if keepaway simply isn’t an option and you’re struggling to teach your dog to play fetch.

Keepaway might be super fun for your dog – or maybe he just doesn’t want YOU to have the toy because you’re not very fun to play with.

Are you being a bossy playmate?

Scenes like this remind me of being a kid on the playground, trying to play with the one kid who was always adding new rules to the game and demanding that everyone else play along to their version of the game. I don’t remember that being very fun. I think many of our dogs feel the same way.

In short, your dog might be playing keepaway because keepaway is more fun than playing fetch with your rules.

If this is your problem, your first goal is to teach your dog that engaging with you is FUN FUN FUN! Approaching you with a toy is FUN!

Try the “Chase ME!” Game to teach your dog to come to you

Running away with the toy just gets the dog ignored (so be sure you’re in a secure area).

If a dog who likes to play keepaway approaches me with a toy, I actually turn away from him with a friendly face, bouncy knees, and light movements. I might hop around and move away from him to entice him closer.

If he does, I might playfully push at him or the toy (not pulling at it). This teaches him to drive INTO me, coming back for more.

Of course, this sort of play can scare some dogs. If this approach backfires, try being a bit more subtle with your play.

If you’ve gotten to the point where your dog will follow you and play with you a bit, you are ready for the next step.

Next time your dog approaches you instead of running away to play keepaway, praise him and then toss a toy away from you.

Try to ensure this toy is similarly exciting to your dog’s current toy – don’t try to compete with his favorite squeaky using a boring old toy.

Toss the toy away from you and your dog, so he’d have to move past you to go get the toy.

If he pursues the new toy, great! Collect the old one, re-engage in your “Chase me!” game, and try again in a few moments (not right away).

If he doesn’t pursue the new toy, that’s ok. Go back to the “Chase ME!” game for a while, then try again. If it fails again, try a new approach.

Teach your dog that dropping the toy is a GREAT idea

Sometimes we fall into the trap of wrestling a toy away from our dogs to end the game. What did our dogs just learn? That letting us have the toy is a really, really bad idea.

Teach your dog that dropping the toy makes you FUN FUN FUN! If he drops the toy, immediately toss it back, bounce around, and be super goofy.

You can also reward him for dropping the toy by throwing another toy or even giving him food.

But if you’re going to do something not-fun (like end the game), consider just letting your dog keep the toy until he drops it and ends the game on his own.

I often will clip the leash on, then play a bit more with my dog (say, tug o war for 20 seconds), then let my dog carry the toy home. This helps teach him that the leash going on isn’t all bad!

Once your dog is reliably dropping the toy in anticipation of more playtime or treats, you can start really playing fetch. Right now, it’s ok if you have to walk a bit to get the toy. We want this to be fun and easy!

If your dog tends to drop the toy 10 feet away from you, start to throw the toy behind you so that coming towards you actually puts the dog closer to where the toy will eventually go.

If all else fails, try a flirt pole

We’ve already written about how to build and use a flirt pole. They’re one of my all-time favorite solutions for dogs and people who just can’t agree on how to play.