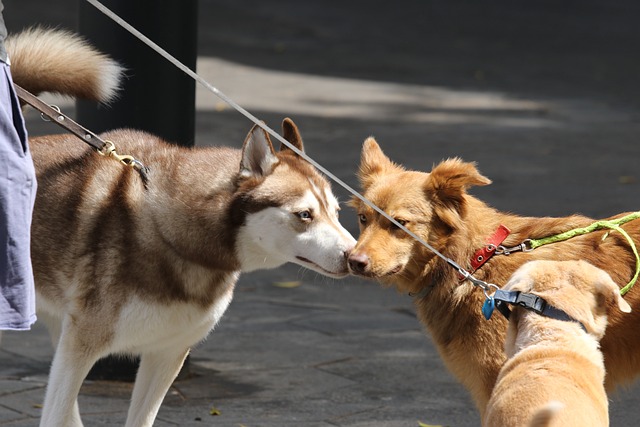 Dogs sniff each other as a normal greeting. So why do some dogs get so upset when other dogs approach to sniff their bums or private parts? While humans don’t want strangers smelling our butts, shouldn’t dogs be ok with this?

In today’s Ask a Behavior Consultant, we’re tackling this query, which reads,

“My dog gets really bothered when a dog sniffs his privates and barks aggressively at them then chases them off. I read this is a normal behavior for dogs to get to know each other. Where does this trigger come from and what can i do to help fix it?.” – Snarky Sniffer

Inguinal sniffing is definitely part of doggie social behavior. Sniffing helps dogs learn about each other, from their diet to hormonal status. However, adult dogs mingling with lots of other unknown adult dogs in a small space is not normal socially.

If Your Dog Doesn’t Like Being Sniffed, Do Not Take Him to the Dog Park

Snarky Sniffer notes that the dog – a corgi – goes to the dog park every day. I would argue that a dog who consistently growls and snaps at other dogs who attempt to sniff him is not enjoying the dog park and should not be going on a daily basis. This dog is clearly and repeatedly telling you (and the other dogs) that he doesn’t want to make a new friend right now!

Snarky Sniffer also notes that their response is to grab the corgi and pull him away from the other dog. Sadly, this is probably making the problem worse as well. Rather than having positive experiences with other dogs, he’s learning that other dogs scare him (making him growl), then his owners pull him away (which probably scares him a bit more), perpetuating the cycle.

If the owner pulling Snarky away isn’t scaring him, it still could be exacerbating the problem by teaching him that growling gets other dogs to give him space. That’s not a bad lesson to learn, in part because it prevents him from escalating to biting. However, it’s not going to address the growling or underlying emotions that cause growling.

This pattern has been going on for Snarky Sniffer for two years. At this point, we know that this behavior is not a phase and is not going to go away without changing our approach to it.

Why Does My Dog Hate Being Sniffed?

It’s just about impossible to say for sure why Snarky Sniffer is uncomfortable with other dogs checking him out. That said, there are a variety of potential hypotheses:

My main guess for Snarky Sniffer is that the dog park is just a bad spot for him. He’s learned that other dogs are rough or unpredictable there, and due to his size or age he’s decided he’d rather tell them to back off than wait to see how they’ll react.

Whether his owner’s response is frightening him more or teaching him that growling gets other dogs to leave, the problem is perpetuating due to the response.

How Do I Help My Dog Stop Growling at Other Dogs?

The good news is, we’re likely to be able to help Snarky growl at other dogs less often.

In dog behavior, we often talk about the bite-to-fight ratio as a prognosis for success. So far, Snarky hasn’t been getting into full-on fights; he’s just threatening other dogs until they leave him alone. This is a good sign that the aggression isn’t so severe that it’s dangerous to work on.

The first step towards helping Snarky is to stop going to the dog park. Period. He clearly is uncomfortable with strange dogs approaching him, and we simply can’t protect him from strange dogs at the dog park. In order to change Snarky’s mind about other dogs, we’ve got to change his interactions with them. And we don’t control the dogs or their owners at the park.

If you feel that not going to the dog park is going to detract from your dog’s quality of life, explore some other ways to enrich his life. This could be training games, puzzle toys, sniffing walks, or any number of other things. Again, he’s clearly not enjoying meeting other dogs at the park, so don’t keep going back and forcing him into it. You’ve tried for two years, and it’s not helping.

Next up, we’ll try to find some well-matched dogs to focus on befriending for Snarky. Like people, dogs have preferences for certain types of friends. Generally they’ll like other dogs of similar size and energy level, as well as those with similar play styles and hobbies. Often this means dogs within a breed or breed group are a bit more likely to get along.

For example, my border collies tend to like other border collies, as well as other herding dogs like Aussies and Cattledogs. They also tend to like sighthounds like Whippets and Greyhounds.  It’s noted that Snarky lives with a King Charles Cavalier. I’d start out with other Corgis, Cavaliers, and other medium-small, robust dogs. You know your dog best, though – if you know they prefer little dogs, big dogs, gentle dogs, fast dogs, etc., go with your experience.

Now that we’ve got a couple potential “friends” lined up, it’s time to plan some remedial socialization. The key thing here is movement and plenty of space. Generally I like to do this on a long line in a park, where the dogs have plenty of things to sniff and lots of space to avoid each other. Keep the dogs moving and engaged with their environment.

Don’t hover and stare at them, or step in scolding them to “be nice.” Human interventions in dog introductions rarely help. If the dogs do approach each other, step away and keep the leashes loose. Pulling on the leashes or impeding their space can both cause an escalation. After a couple seconds, call the dogs apart. Keep moving and let that happen again if it went well.

This method is demonstrated here using the “Parallel Walk” method.

As Snarky gets more and more comfortable with his new friends, you can be less cautious with those friends and allow him more of any sort of free play that he enjoys. If he’s not the playing type (my older border collie isn’t), don’t push it. Listen to him and what he says he enjoys. It may be that hanging with other dogs just isn’t his thing.