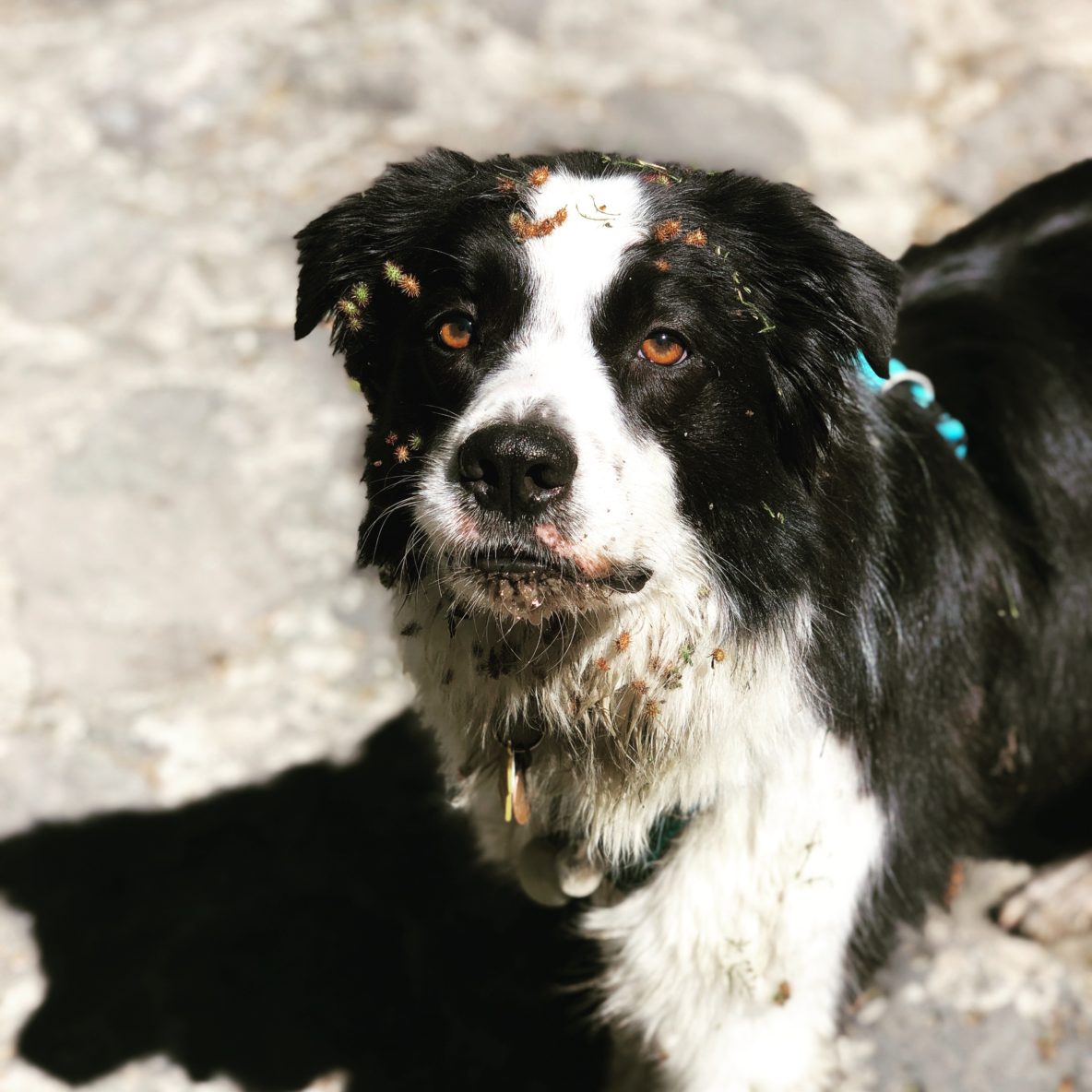 Barley and I spend a lot of time hiking, trail running, and generally having the times of our lives on the trails of North and Central America. Since he’s a long-haired border collie, that also means that he gets covered in burrs and stickers, and often has baby dreadlocks forming.

Although I’m no groomer, I do like to have a well-kept dog. It makes him softer and he looks better for his Instagram followers (@collie.without.borders).

Since I live in Airbnbs across the world, I have a pretty small grooming kit. It’s got to be portable!

Here’s how I remove burrs from my dog’s fur – and my four favorite brushes that I keep on hand for burrs, stickers, dreadlocks, and a generally good-looking long-haired outdoorsy dog.

How to Remove Burrs, Stickers, and Mats the Right Way

The prickly seeds of many plants love to cling to our dogs. That’s how these plants reproduce, after all!

The longer that you ignore a burr, sticker, or mat, the worse it will get. Even if you’re in the middle of a hike, it’s often worth it to pull out as many burs as you can right away.

If your dog has gotten into a particularly nasty set of burrs, you might want to use gardening gloves to avoid getting your fingers pricked!

My Four-Part Grooming Kit for Removing Burrs and Dreadlocks

Barley, my Border Collie, is long-haired with a relatively smooth double coat. His coat is very different from a Poodle’s curly hair or a Wirehaired Pointing Griffon’s burr-repellent coat.

You’ll probably have to experiment a bit to ensure find your winning combination!

Of course, your grooming kit for removing burrs will vary a little bit based on your dog’s coat type.

Be sure to help your dog learn to love brushing by using a soft slicker brush and treats regularly – even if he doesn’t need to be groomed!

I brush Barley several times per week, regardless of whether or not he needs it.

This helps him remember that brushes are great. If I only brushed him when he had painful burrs or dreadlocks, he’d quickly start avoiding me!

1. A Dual Pin and Bristle Brush for Starting and Finishing

I always start out brushing with a pin and bristle brush. This helps work through any massive mats and can take some stickers and burrs out right away. The bristle brush is also perfect for teaching your dog to tolerate brushing, because it won’t pull on fluff too much.

Rotating tooth combs are new to me, and I’m obsessed. I discovered this comb when staying at a horse ranch outside of Yosemite. Barley ran through some brush and came back absolutely dripping in burrs! The ranch owner, used to this problem, introduced me to her rotating tooth comb.

The rotating teeth help coax the burrs out of your dog’s fur with minimal pain.

While you probably could get by with just one rotating tooth comb, I like to have both a wide-spaced and narrow-spaced option for working through different burrs.

The wide-spaced one is a bit less painful for dogs, but it won’t get really small burrs as well.

As I said above, it’s nice to have both a wide-spaced and narrow-spaced rotating tooth comb.

I love this comb for finer operations because of its handle. That makes it a bit easier to maneuver around sensitive areas like your dog’s armpits!

4. An Anti-Matting Comb to Work through Dreadlocks

This was the first brush that I purchased after getting Barley. I already owned a pin and bristle brush from my foster dogs, but I was at a loss for how to deal with Barley’s ever-recurring butt dreadlocks (he gets massive mats where his tail wags, it’s adorable).

This comb is sharp, so be careful. It literally cuts through tangles in your dog’s fur. As mentioned in the how-to section above, work tangles tip to root (always pulling from root to tip, but only taking small subsections at a time).

The anti-matting comb works really well on big burrs and tangles, but often doesn’t work well for small dreadlocks. If your dog’s dreadlocks are tiny and tight and can’t be pulled apart, your best bet might be to cut them out.

I honestly prefer to just snip out dreadlocks in particular, especially if they’re small. Just try to remove as little fur as possible. It’s easier and hurts Barley a lot less!