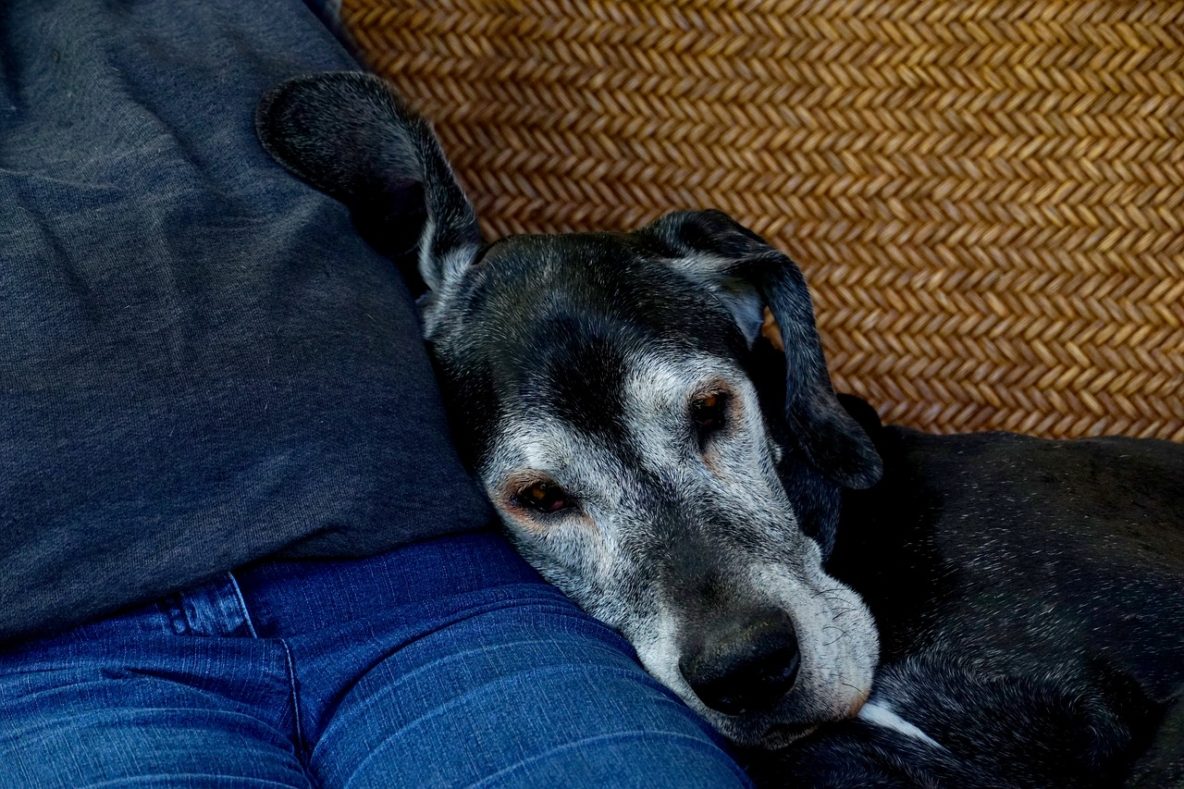 It’s not uncommon for aging dogs to get a bit grumpier. Pain and diminished sensory capacity can make the whole world seem more threatening.

So how do you stop aggression in a senior dog? In today’s Ask a Behavior Consultant, we cover this tough topic.

Can you train an aggressive, disabled senior dog? I’ve moved into a home with two senior dogs with my French bulldog. The Boston terrier is blind, deaf, demented, and incontinent. He also attacks the bulldog so much so that we have to keep them separated.

– Sincerely, End of My Rope

This is definitely a tough situation. Here’s how I’d tackle it if I was working with a client:

Our writer has already done a good job of this – she’s keeping the dogs separate. That’s a necessary first step to stop the “bad blood” between the dogs from getting worse.

Baby gates, exercise pens, and crates are all a must when you’ve got dogs who are aggressive towards their housemates.

Muzzles won’t cut it here – we need to keep the dogs physically separated, not just prevent them from biting each other.

Whenever we’re seeing aggression in a senior dog, the first stop should be the vet. Aggression is often linked to pain.

The older dog might have failing vision, making the movements of our writer’s dog scary. The Bulldog might have painful hips, and he’s behaving in a defensive way to keep anyone from jostling him in a painful way.

A full veterinary checkup is absolutely necessary when you see aggression issues in older dogs.

Older dogs can be a bit neglected as far as their behavioral wellness. They don’t need much exercise, so we often don’t do much with them at all!

But just like with elderly people, it’s imperative that we keep the minds and bodies of our aging dogs relatively active.

Ensure that all three dogs are getting plenty of age-appropriate exercise, ideally out in nature. Feed them out of puzzle toys and keep them entertained.

Just because they will sleep all day doesn’t mean that’s best for them.

What exactly sets the old Bulldog off about the Boston Terrier? We need to determine the causes (antecedents) of the dog’s aggressive behavior before we can make any headway with training.

Common antecedents to aggression include:

There might be a long list – and that’s ok. It just means we’ve got more work to do.

5. Training an Aggressive Dog to… Not be Aggressive

Now that we know what sets the Bulldog off, we can start to gradually reintroduce the dogs in situations where those triggers won’t happen.

That might mean that we start with neighborhood leash walks, then backyard training sessions, then inside.

As the relationship improves, we can also gradually reintroduce the triggers in some cases. Of course, if the aggression only happens around meals, it’s often wise to just separate the dogs for mealtime forever.

It’s absolutely mandatory that the dog is not punished for being aggressive or for threatening to be aggressive – especially with a senior dog.

If the Bulldog gets aggressive when the Boston Terrier approaches, a sample training plan would look like this:

This is just an overview of how to actually teach the senior dog not to be aggressive – it’s best to proceed with the help of a professional trainer (like me – I take aggression cases around the world, especially if you’re in a remote or rural area).

Finally, in some cases, it’s easiest for both dogs to just continue keeping them separate. This is particularly true with senior dogs.

Our writer’s Boston Terrier is 12. The Bulldog is also old. It might be less stressful for the dogs and people to just continue the separation.

Kayla is from Ashland, Wisconsin but lives in Missoula Montana. She holds a degree in biology from Colorado College and has spent years working in zoos, animal shelters, and as a private dog trainer. When not working on Journey Dog Training, Kayla works at Working Dogs for Conservation. She is a Certified Dog Behavior Consultant. She shares her life with her dog Barley.

Get Help from Journey Dog Training

We're here for you during the COVID-19 Pandemic. All courses, e-books, and webinars are 50% off.

Help! My Dog Submissively Urinates All Over the House!