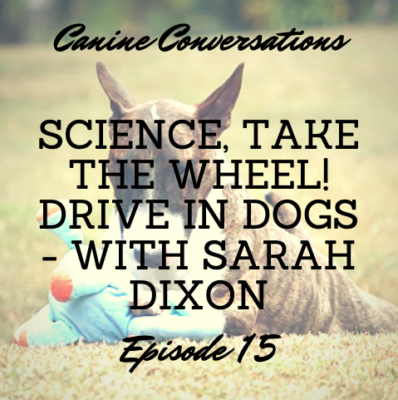 In this episode, Kayla talks to Sarah Dixon about the concept of drive in dogs. Sarah is the president of the board of the International Association of Animal Behavior. She works at Instinct Dog Training in New York City.

You can learn more about Sarah here.

We started out by discussing three main ways that we see the phrase “drive” being used:

We decide that, for us, drive generally means that a dog is willing to work hard to gain access to a reinforcer. Dogs might have different ideal reinforcers (tug versus food, for example). Drive is related to arousal, but they’re not the same thing.

Basically, the problem with “drive” is that it’s a label. It’s used as if it’s a permanent characteristic of a dog, which isn’t necessarily true. That sort of thinking can be potentially limiting for the dog and the trainer. It’s also problematic that every trainer probably has a different definition of what drive means – making it difficult to discuss this intelligently.