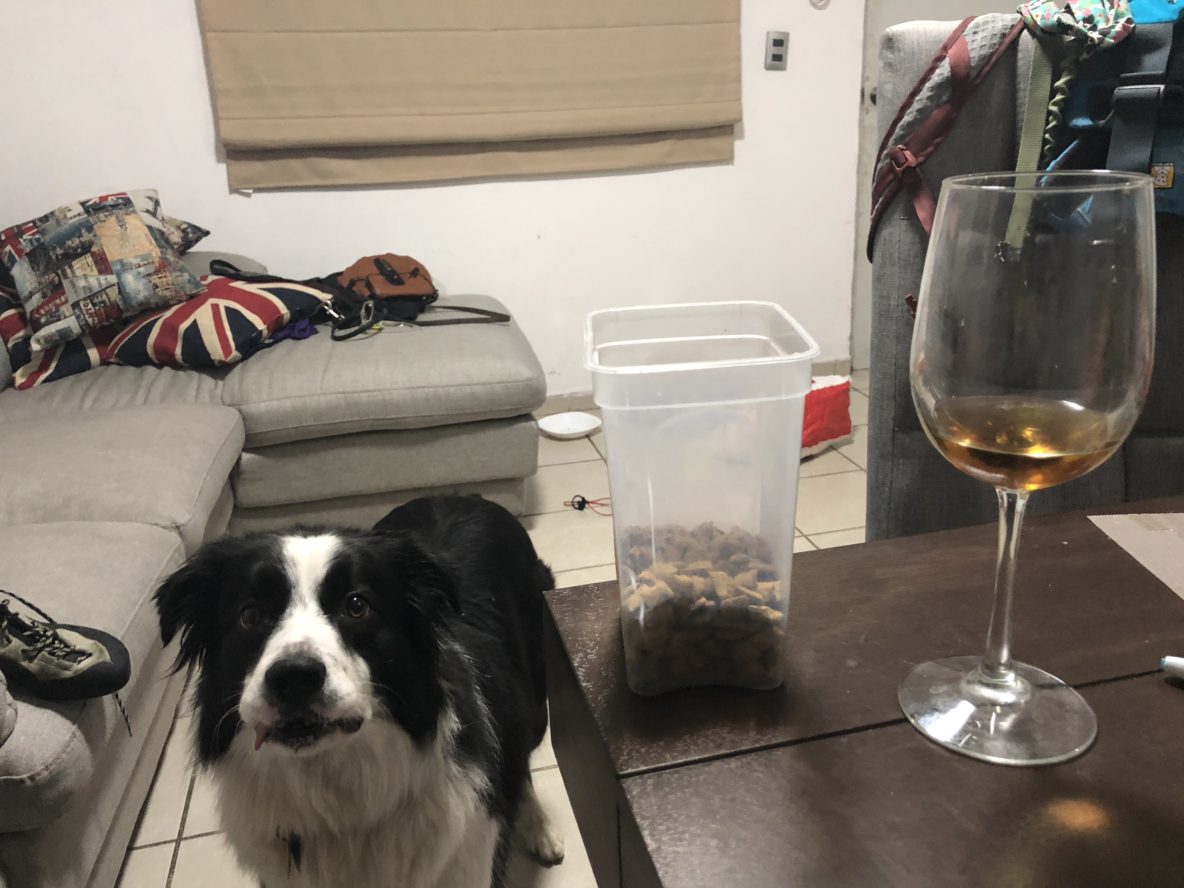 Sometimes, the more our dogs are exposed to things, the worse their responses get. Why do dogs get more scared of things with more exposure, rather than getting better?

This is a common problem that’s really frustrating. It seems like your dog should learn that something isn’t scary if every time it happens, nothing bad happens. We think dogs should just “get over it” – but they often don’t. Let’s look at how exposure can make canine phobias worse, not better.

If you need help with your skittish dog, purchase a one month email support plan and I’ll help create a plan with you for your dog.

The Case of Barley and the Rooftop Guard Dog

I got to thinking about this problem – dogs getting more scared with more exposure – thanks to a recent series of incidents with my own dog, Barley.

Last week, we rented a cute studio apartment in Guadalajara, Mexico. We planned on spending the week working out of a coworking space downtown, eating tortas, and exploring La Barranca and other nearby trails.

But as we carried our bags up to the Airbnb through an open-air hallway, a bully-breed mix charged at us from above. He (or she) stood on the roof, short-lunging and barking relentlessly from just a few feet above my head.

This was the resident guard dog. He lived on the roof of the complex.

No matter, I thought. I’ll just feed Barley a few treats whenever we walk past. I’m a Certified Dog Behavior Consultant, for Pete’s sake. I got this.

As we unpacked our bags, the barking continued. Then it somehow got louder. The dog had run around to the other side of the apartment and was now barking into our bedroom from above the laundry alcove.

Barley had his ears pulled far back and kept glancing between us and the barking dog. We fed him some treats and pulled the blinds, but the guard dog just kept on barking.

The next few days, we just kept feeding Barley treats and trying to ignore the other dog. We baby-talked Barley and tried to distract him.

After about five days of this, though, Barley had enough. He started to whine preemptively as we climbed the stairs outside the apartment, whimpering and getting stressed before the guard dog had even spotted us.

Inside the apartment, Barley started to run towards the sound of the barking guard dog whenever he heard it, his hackles up, mouth puckered and ready to bark.

Luckily, we left Guadalajara the next day. No more rooftop guard dog.

I have no doubt that, had we stayed in that apartment longer, Barley would have started barking back at the guard dog. And why wouldn’t he? We essentially had an upstairs neighbor who was constantly yelling, screaming, and swearing at us.

All of these problems, despite the fact that I was feeding Barley treats and doing my best to use white noise.

When we arrived in Mexico City, Barley was jumpy. He startled at slight sounds, his ears pinned almost constantly. The rooftop guard dog was gone, but now Barley was just plain nervous about sounds.

Why didn’t Barley realize that the rooftop guard dog was all bark and no bite (possibly only because he couldn’t reach us), and just chill out? Why did Barley get jumpier with time, rather than less jumpy? 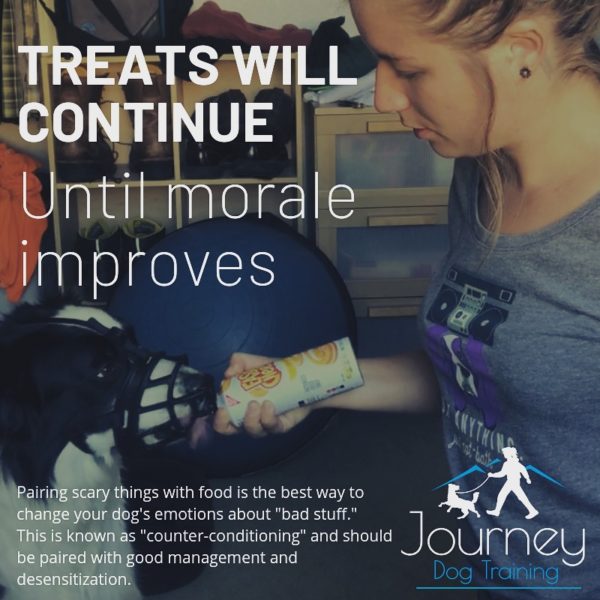 The Problem With Exposure is Sensitization

I’ve dedicated my adult life to understanding animal behavior. But I was still surprised at how quickly Barley “sensitized” to the rooftop guard dog.

It only took five days to turn my even-tempered dog into a jumpy, barky, nervous wreck. Imagine if we’d rented that apartment for a 12-month lease. Or if instead of a rooftop guard dog, Barley had spent months in a shelter being barked and lunged at by other dogs whenever it was cleaning or walking time.

When we expose our dogs to stressful things, one of three main things can happen:

This is what we want – your dog learns that the Scary Thing is actually Awesome. Desensitzation won’t usually happen without your help, though – it’s got to be careful and systematic.

When I’m working with clients, I build up careful training plants for systematic desensitization and counterconditioning so that we don’t leave anything up to chance. So rather than just exposing Barley to barking dogs over and over, I expose him to small amounts of barking and pair that barking with treats so that Barley learns it’s great to hear other dogs barking!

The problem is, exposure alone rarely leads to desensitization. We’ve got to be more systematic to get this desired response.

A Human Example: When I first came to college, I really didn’t enjoy parties. I found them loud, gross, and headache-inducing. But I joined the Salsa Club and fell in love with Latin dance. I started feeling confident dancing, and even started to enjoy the throbbing music that came with our quarterly social dances for the club.

By my second year of school, I found myself enjoying house parties without Salsa Club. Essentially, I’d slowly been desensitized to what I once found repulsive (house parties) by gradual, slow exposure to less intense versions of that thing (salsa club) and pairing the upsetting things with good things (loud music, dancing, and alcohol = fun time to dance, not just gross sticky floors). I actually started to love house parties.

In this case, your dog doesn’t really learn that Scary Thing is actually awesome.

Instead, your dog just kind of ignores the Scary Thing because it’s irrelevant. This response looks OK, but it’s really defined by your dog’s lack of a response.

Without getting nitty-gritty about body language or checking salivary cortisol levels, it’s hard to say if your dog is actually calm, or if she’s just learned that trying to escape isn’t worth the trouble. We don’t really love habituation, but it’s better than the third option.

A Human Example: When we first came to Guadalajara, we heard a lot of loud popping sounds. At first, we thought they might be gunshots. That was a scary thought. Every time we heard one, we looked up and around. But over time, we realized that they came at regular intervals in the afternoon.

No one else responded. So we started ignoring them. We didn’t like the sounds (as would be the case if we were desensitized and counterconditioned), but the sounds were irrelevant to us. Eventually, I asked a local and he said they were a fireworks display from a nearby theme park.

This is the nightmare – and this is what Barley was experiencing.

Rather than getting more relaxed with each bark from the guard dog, Barley got edgier. Barley was also experiencing stimulus generalization, a separate phenomenon where he got jumpier with all sounds rather than just the barking dog.

Sensitization occurs when an animal gets more and more stressed by the same Scary Thing, rather than ignoring it or learning to love it.

A Human Example: I hate the sound of chewing. Nothing bad happens to me when people chew, but as a kid, the sound of chewing drove me nuts. Over the years, this aversion has gotten worse instead of better. Like Barley, I have experienced some stimulus generalization.

I now have irrationally negative responses to the sound of lip-smacking, sucking, chewing, or any other “weird mouth sounds.” My response has gotten more severe since childhood, rather than better, despite the fact that apparently, nothing bad comes from chewing sounds. I’m sensitized to the sound!

In one study on cats and kittens in 1983, repeatedly exposing all of the cats and kittens to a novel, docile dog produced a wide array of responses. Most of the felines started out with threat displays. Some “got better” over time, displaying habituation. Others got worse first, then got better.

I bring this up to point out that it’s impossible to predict whether your dog will habituate or sensitize if you’re just exposing her to the Scary Thing. Each animal will react to an identical situation a bit differently. It’s far better to stack the deck in your favor using systematic desensitization and counterconditioning.

How Can I Desensitize My Dog Effectively?

If your dog is skittish (and getting worse), it’s time to make a plan. As I said above, exposure is not enough. Don’t just subject your dog to repetitions of whatever freaks her out.

Desensitizing Albert the Vizsla to Kids

For example, I once worked with a Viszla named Albert. Albert was terrified of kids. He hid if he saw them, and growled if they came closer.

We could have just put Albert in a crate and let kids come hang out. Albert would be initially terrified, but probably would eventually exhaust himself and stop growling. But Albert wouldn’t have been cured – just tired and stressed-out.

Instead, we taught Albert to really enjoy being in a huge soccer field. He went there every day and played “games” like learning to hand target, relaxing on his mat, and other basic obedience skills.

After Albert had all of his skills down pat, we went to the park. Across the park stood Albert’s owner’s 12-year-old grandson. The grandson just stood there with his mom. Albert noticed him, but the grandson was so far away that it wasn’t worth worrying. We played Albert’s normal obedience games, and then we went home. Albert got a ton of tasty treats any time he looked over at the grandson.

Every time Albert noticed the grandson, he got an extra-special piece of chicken.

The next time, the grandson was a bit closer. But Albert kept playing obedience games and getting extra treats. The grandson kept his distance and stayed still.

We did this until the grandson was about 10 feet away from Albert. If at any point Albert got nervous, we backed up and took a break.

With the grandson about 10 feet away, we asked the grandson to lift his arms up and down, slowly and smoothly. Albert kept getting food and playing games.

We gradually asked the grandson to come closer, move more, move faster, or make noise – but we only added one factor at a time. We also started practicing with other, well-behaved kids in other open places.

Over time, Albert learned that kids actually help predict the arrival of chicken! He also learned to focus and ignore the kids thanks to the obedience games.

You can do this with your dog, too. If you need help coming up with a desensitization plan, purchase a one month email support plan and I’ll help create one with you for your dog.

The little dog was shaking in her skin, cowering beneath her bed in the shelter. So scared that she'd peed...