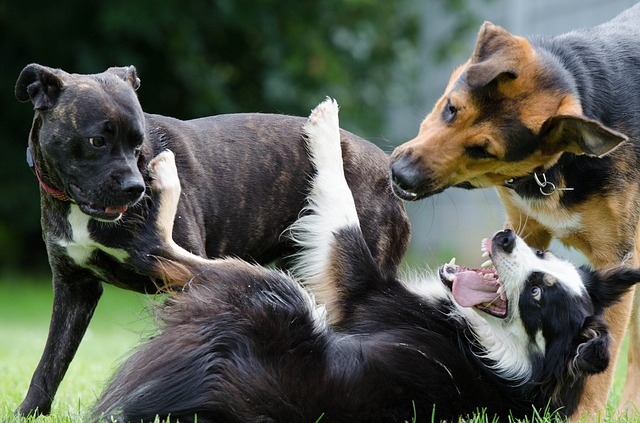 Dogs are social animals – right? So how come some dogs don’t play with other dogs? It can be confusing and frustrating (and even downright embarrassing) to own a socially awkward dog.

In today’s Ask a Behavior Consultant, we address the problem of a dog who not only doesn’t want to play with other dogs – this dog is downright uncomfortable with the idea of OTHER dogs having fun!

Our dog has never played with a dog since I’ve had her – even our other dog. She’s incredibly well behaved and well trained in all other aspects. If the other dog gets too overexcited or tries to invite her to play, she’ll put her hackles up and raise her tail. She’s even tried to break up other dogs who are playing! What gives?

Let’s face it: not all dogs are natural social butterflies.

It sounds like this owner is doing a lot of things right for her dog from her intake form: the dog is well-fed, gets toys, and goes .

This dog is living a good life. But she’s still really impolite with other dogs. She’ll snap at other dogs for the smallest infraction and seems to be the self-appointed “fun police.” So how do we help our Socially Awkward Lab blossom?

Not All Dogs Love Other Dogs. And That’s OK.

The way I’m reading this, our Socially Awkward Lab might be happier without other dogs around. She’s already living a good life, and it’s clear that being around other dogs is NOT fun, refreshing, or overall good for her.

If Socially Awkward Lab was my client (or my own dog), here’s what I’d do:

The most amazing thing about being so protective of your socially awkward dog is this: the more freedom and space you give her, the friendlier she may become.

It might seem like you’re kind of babying your pup – protecting her from the world. Think of it as respecting her wishes. It’s like raising a bookworm teenager – why pressure her into going to house parties if she’d rather hang at home?

We talk more about why constant exposure to scary stuff can actually backfire here.