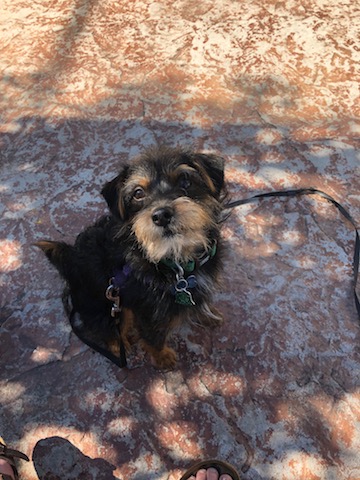 Dealing with behavior problems can be a frustrating and nerve-wracking issue.

When our pups aren’t responding how we would like them to it is time to take a step back and evaluate how to deal with the situation. Sometimes reaching out for help is the best answer and I did just that with the amazing trainers at Journey Dog Training.

While I do a lot of writing on other areas for Journey Dog Training, I was totally out of my element with behavior issues and didn’t even know where to start when my dog began displaying some behavior problems.

The Issue: My Dog Barks and Lunges at Other Dogs

A few months ago, when Peanut was about 9 months old, he began displaying aggression towards other dogs and sometimes people while on walks.

It was very sporadic and random seeming.

Some dogs would set him off, others he would love to say hello to and give a friendly sniff.

It was also only when he was on leash.

This never happened at the dog park or anywhere he was off-leash. Some people he would be happy to have pet him, others he would growl at until we moved beyond them.

I was getting really frustrated and was frankly embarrassed to be taking Peanut out on walks because I didn’t know how he would respond to people and there is nothing worse than your dog snipping and barking at strangers and other dogs.

At a loss, I turned to Kayla for advice on how I could approach this issue and try to resolve it.

First off, let me start by saying how amazing the behavioral crew at JDT are.

Yes, I write for them but that doesn’t change the fact that they are totally professional, soothing, and deeply invested in helping with any problems you and your pet might be having.

Kayla and I spoke on the phone and she was reassuring and jumped right in with how we can start getting positive about the situation.

Changing your frame of mind about a behavioral issue is the first step to conquering it. If you go into it demoralized and afraid nothing will change then, guess what…it won’t!

But Kayla helped me realize this is totally normal and something that we could remedy.

The Advice: Keep It Simple!

With pen and paper in hand, I diligently wrote down everything Kayla told me to do. She broke it down into easy to follow and gradual steps so that neither Peanut nor myself would become overwhelmed and end up failing.

First off, we would begin by using positive reinforcement (i.e treats) at every instance of seeing another dog or person on a walk. I like to use something like this treat pouch to make getting treats easy. I used his favorite treats so that I could really get his attention.

Next, to keep things simple and help distract Peanut when we saw other people or dogs, we would cross the street.

This way he was far enough away that he wouldn’t be pulling and trying to snarl at other dogs, but still knew that they were there.

I would actually give multiple treats over the course of meeting someone:

Within a week Peanut started turning to me when he saw another dog or person, waiting for a treat.

This was a huge stride for us and something Kayla told me to expect to have happen. Peanut would see person or dog and turn to me, so he wasn’t barking or snarling, he was waiting for his treat.

We did have to be far enough out of reach, though, otherwise the treat wasn’t always as enticing as the prospect of meeting someone new.

Next, I started moving Peanut slightly closer to the person or dog. For example, instead of crossing the street we would just move onto the boulevard, out of reach but much closer to the distraction.

Peanut would still turn for a treat but it took some practice to get him to be engaged/distracted with me and not the other person/dog.

Every once in a while he would be a little too close or another dog would pull towards Peanut and that would set him off.

Instead of getting frustrated and yelling at Peanut or losing hope, I would just take a step back, praising with more treats, moving a bit farther from the distraction, and continuing to be positive.

Kayla told me that one of the worst things you can do, and unfortunately a common response, for dog aggression is to be aggressive with your dog.

Yanking, yelling, or just plain never walking your dog is the absolute opposite of what you want to do. This reinforces the idea that bad things happen when other people or dogs walk by, and so they act with even more aggression and fear.

And not walking them, well you can see how this would lead to many problems like pent up energy, lack of socialization, destructive habits… you get it. Definitely don’t do that.

Remaining positive is the best thing to do when dealing with behavior issues. Kayla really helped me understand that I shouldn’t be ashamed of Peanut’s behavior, that it is normal, and totally treatable.

Results: After Our Call

Within a month Peanut was reliably responding positively with 9/10 people or dogs encountered on walks. There would still be the odd one out that would set him off but I would respond calmly.

When he was having a fit I would talk to him in the soothing baby voice we all use with our dogs (don’t try to deny it!) and give him treats while he calmed down.

Continuing this is what ultimately lead to him being well behaved with pretty much everyone on our walks within 2-3 months. As an added bonus, Peanut now responds incredibly calmly to other dogs freaking out.

This was something that always set him off before. If another dog on leash, in a fenced yard, or in car was frantically barking, excited, or seemed aggressive and trying to attack Peanut, Peanut would always respond in kind.

Now he doesn’t even bark or pull when we come across other dogs acting in this manner. He still turns to me for a treat, which admittedly I have been bad about always carrying since Peanut began making such strides.

Dogs from any background can have behavioral issues and there is no shame in seeking out help when you are in over your head.

So many amazing dogs end up in shelters because of a small problem that was allowed to fester, or because a pet parent didn’t know how to find proper instruction to deal with underlying issues.

I cannot say enough how much of a difference reaching out to a trainer has made for both me and Peanut. I was so stressed and miserable when Peanut was dealing with his leash aggression.

I didn’t want to walk him and really just didn’t know what to do with him.

Finding help has been a life-saver. Since Peanut has made these behavior changes I can bring him into work, walk him without fear of bad interactions, and introduce him to new people.

While I am still working on reinforcing good behavior, there is always a small misstep and sometimes I don’t have treats when I should, I let Peanut get too close to a situation that isn’t the best for him, or we just have an off day.

The key is to remember nothing is permanent and progress happens over time, not overnight. You can see amazing results in your dog and if you are having any behavior issues I highly recommend you seek out help.

Not only will this save you weeks and months of headaches, you can rest assured knowing you are going to get results.