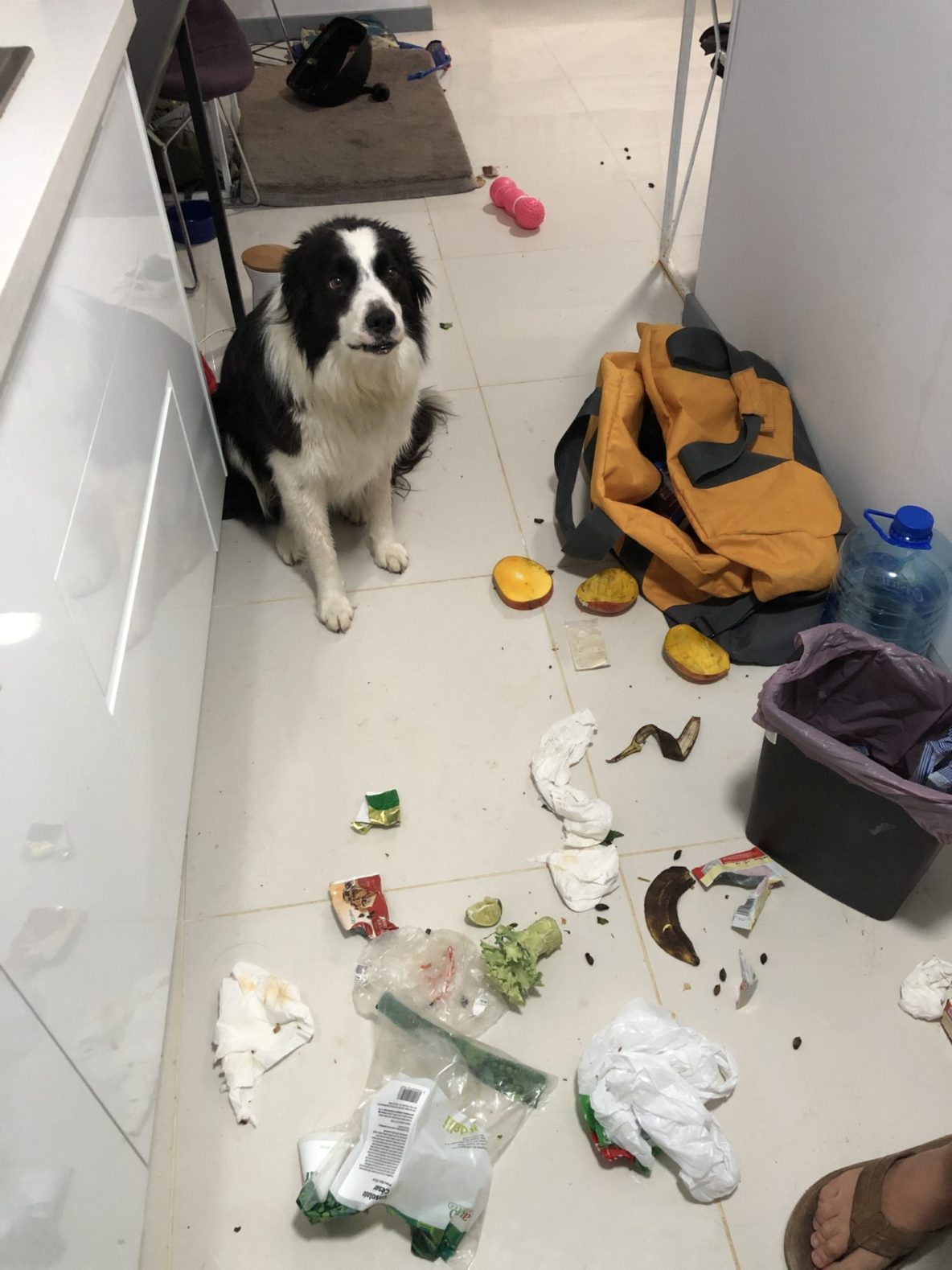 Dogs are natural scavengers – and they’re quite good at it. While it’s common for dogs to dig in the trash, that doesn’t mean that you just have to “deal with it” for your dog’s lifetime.

In today’s “Ask a Behavior Consultant,” we tackle how to solve this messy problem.

I recently took in a stray extremely thin boxer mix that was found digging in . He is very well mannered while supervised, but when you aren’t watching his is up on counter tearing into any packaged food he can find.

I know firsthand how frustrating this problem can be – I wrote all about my troubles with Barley’s counter-surfing ways in a blog post titled, “I’m Not Mad, I’m Disappointed.”

While digging in the trash and stealing food from counters isn’t the exact same problem, dogs often do both.

Stealing food and getting into the trash often have the same root problem: dogs who are given an opportunity, dogs who are bored, and/or dogs who don’t know better.

Let’s walk through how to stop your dog from digging in the garbage, step by step.

One of the most important ways to stop your dog from digging in the trash is to stop letting it happen.

This seems self-evident. It also can feel like a cop out.

But we put child locks on chemical cabinets when we have children, use leashes to keep our dogs from running into traffic, and don’t keep tempting foods in the fridge while we’re dieting.

Here are a few ideas for how to do this for you trash-digging canine:

It’s SO important to figure out how to lock food and trash away so your dog won’t get at it.

That’s because every time your dog gets into the trash or steals from the counters, he’s basically won the lottery!

When was the last time YOU fed him a whole chicken thigh or let him lick the yogurt container?

Plus he had the fun of shredding and scavenging, something his ancestors did to survive for generations.

That’s why solving trash-digging can be so hard.

For some households (like mine) this might be the majority of your solution for trash-digging. We just don’t let it happen. This is called management.

This is the real winner for many dogs who dig in the trash. It’s often not enough to just try to keep the counters clean – we all know that one day, you’ll forget.

But if we can break your dog’s habit of checking the trash every time he’s alone, we’re more likely to get away with leaving things out occasionally.

Here’s how I stopped my dog from digging in the trash with a Doggie Easter Egg Hunt:

This approach teaches your dog to look for food low instead of high. It keeps him busy and satisfies his natural desire to scavenge – which is incredibly important!

Pairing this with management (and sometimes a bit more exercise) will do the trick for dogs that dig in the trash.

What if He Slips Up and Gets Into the Trash?

Many people focus on this aspect of teaching a dog to not dig in the trash: what to do after the mishap.

Unfortunately, this approach leads owners to try to catch their dogs being bad and correct the dog. This is difficult, since most dogs don’t dig in the trash while you’re watching.

As another downside to this approach, trying to punish your dog for digging in the trash sets you up for fallout.

Your dog might learn that you’re scary or that you coming home from work means he’s about to get swatted. Punishment has fallout – and trying to correct your dog involves punishment.

Rather than focusing on showing your dog how bad he was, try to set up the environment so that:

Things like zap mats, throwing cans of pennies at your dog, yelling, scolding, and spanking can all teach your dog that you’re scary.

Punishing your dog for digging in the trash might feel good – and it’ll probably scare your dog. But it’s unlikely to change his FUTURE behavior.

12 Tricks to Teach Your Dog

Most dog owners love spending time with their dogs - that's kind of the point, right? These tricks are a...