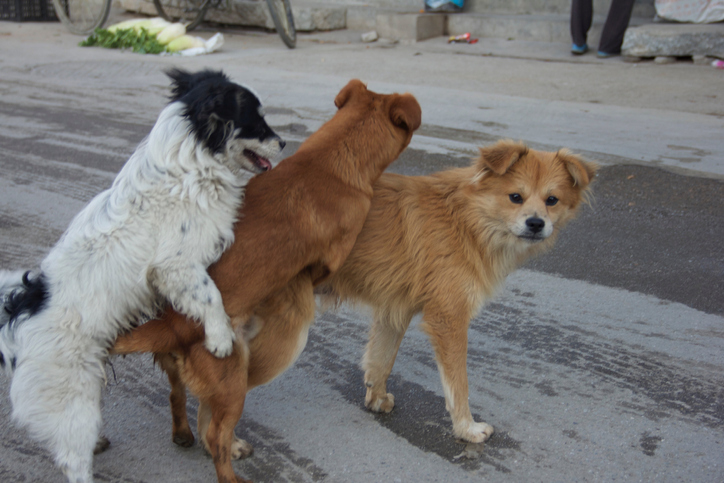 There are a lot of human assumptions as well as misconceptions around dogs mounting and humping other dogs. This is where dog culture and human culture tend to clash.

What is a completely heinous social behaviour for humans, one with a strong sexual innuendo, is not one that is parallelled in dog behaviour.

In fact in dog culture humping is an expression of excitement, over-arousal during play (general arousal, not sexual), stress, or anxiety.

It is not an abnormal behaviour. And it is not likely related to dominance at all.

In today’s Ask a Behaviour Consultant, a reader asks:

“I have a 2 year old female Vizsla and an 8 month old female Vizsla.  Both are spayed. This weekend the older one started humping the younger one. Is this a sign of trying to assert dominance? How do I stop it?”

If It’s Not Dominance, What Is It?

The answer here is simple: humping likely has nothing to do with dominance or social rank in and of itself.

In a play situation, it is likely due to becoming over-aroused, over-excited, and there may even be a little anxiety surrounding an escalating level of play.

Often trainers may refer to humping as a displacement behaviour. This is a behaviour that occurs when a dog feels emotionally conflicted. For example, I worked with a dog who had stranger danger (he was fearful of new people).

He also LOVED when I came to their house for sessions and got very excited about my arrival.

His outlet for this conflict of emotions was humping (my leg, stuffies, his bed). He was conflicted between his excitement of my arrival, and also his anxiety of having me in his home.

In the case of “Keeping the Peace”, the 2 year old is likely becoming either a little overwhelmed with the energy and play-level of the 8-month-old, and/or becomes really over-excited with prolonged and intense play sessions and her arousal level skyrockets.

The humping behaviour is a moment’s reprieve, an outlet for this overflowing excitement.

Should I Intervene if My Dog is Humping Another Dog?

I suggest that, as humans, we take off our human glasses for a moment, set them aside, and take a look at this situation from our dog’s perspective.

Mounting and humping is uncomfortable for us because it’s a taboo subject. We need to set aside our embarrassment, and allow our dogs to be dogs. And a lot of dogs hump.

Having said this, if our dogs are completely stressed out, it becomes a compulsive behaviour, or this over-arousal is causing any additional conflict between play partners (i.e., play turns into a fight), preventing that emotional state from happening in the first place is the ideal route of intervention. But honestly, I would prefer humping to the latter!

Physically removing a humping dog may not be necessary or appropriate and could be interpreted by the humper as a negative consequence, (i.e., punishment).

And by punishing a dog for humping, other issues may arise.

Essentially this punishment can create a negative association with the other dog, you, or play itself. It will exacerbate any conflicting emotions, and intensify or may even cause anxiety to occur.

The bottom line: humping is pretty normal for dogs. As long as both dogs are OK with it, then let them do their thing!

What if The Other Dog Doesn’t Like Being Humped?

If “Keeping the Peace‘s” younger dog is uncomfortable with the situation (showing signs of stress, trying to escape, etc.), she will likely tell her older friend to “get lost”.

Though in all honesty, she likely doesn’t care as much as her human observers. Either way, dog’s are generally pretty good at communicating their likes and dislikes to their friends if we let them.

If the dog on the receiving end is uncomfortable, I recommend calling your dog to you to redirect their attention. If this isn’t working (it will need some practice prior to any humping action), then gently pull them apart to work on an alternative calming behaviour, such as a down-stay.

Preventing Your Dog from Humping Other Dogs

If the is happening in other social situations, with other potential play partners, or is causing distress to the 8-month-old puppy, “Keeping the Peace”  might consider working on a recall.

When their two-year-old Vizsla greets and sniffs a new friend appropriately, then call her back and reward her for returning to you and directing her attention away, mitigating overarousal BEFORE it happens.

Prevention is the best remedy!

Additionally, since mounting is often associated with over-arousal I suggest working on teaching her to be calm, to stay on her place, or to teach an alternative behaviour.

Having said this, usually humping during play leads to a temporary stop to the rough and tumble session (for obvious logistical reasons). The arousal levels then drop, and so will the humping.

Earlier in life I had two wonderful dogs, Monday and Stewart, who liked to play hard. When Stewart became over-excited he would mount, and sometimes hump Monday. Sometimes this was reversed and Monday would hump Stewart.

This lasted for maybe 5-10 seconds, and then play resumed. It never affected their feelings towards each other, it didn’t damage their willingness to play, and they both lived happy, full lives without any intervention. In fact, over the years this happened less and less. The worst thing that happened is that onlookers got embarrassed or would make lewd comments.

Female dogs do hump. This isn’t that surprising, because dogs don’t only hump for sexual purposes.

Why Do Dogs Hump Toys?

Dogs probably hump toys due to stress or over-arousal. If they’ve been corrected for humping people or other dogs, they might turn towards toys to release that stress instead. They might also start humping toys to release stress during playtime.

Because humping isn’t always sexual, neutering your dog won’t necessarily stop him from humping. Female dogs, puppies, and neutered dogs can all hump.