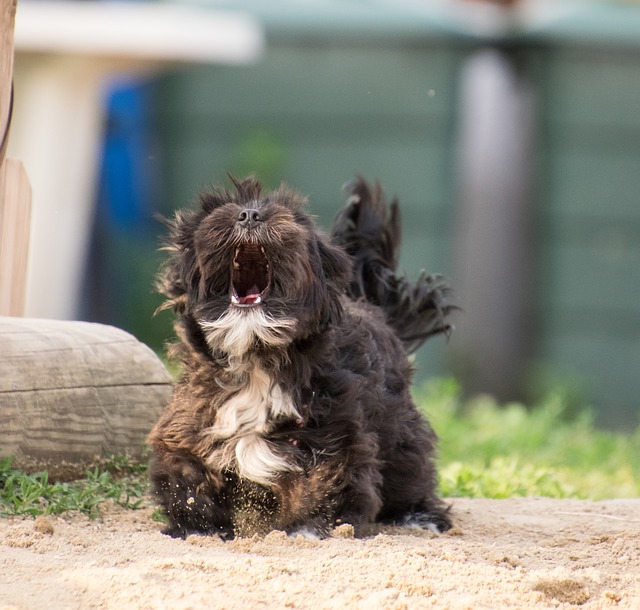 Barking is a totally natural and normal way for dogs to communicate. We have selectively bred certain breeds of dogs for their barking abilities!

The problem is that it can be irritating to us humans. Especially when it is excessive and relentless.

How can we let our puppers know: “Thanks, but that’s enough now” without constantly yelling “NO!”? Which, you may have figured out by now, just isn’t working.

My dog seems to bark at every noise he hears. I’ve tried removing him from the situation and he does okay, but then he does like mini barks. And when he hears someone come in the house, he goes crazy. I’m not sure what to do. – Sincerely, Barking Blitz

Why Do Dogs Bark?

Let us first look at why Barking Blitz’s doggo wants to bark in the first place. Understanding the root cause of a behavior can help us mitigate triggers or change the pattern of behavior over time.

Barking Blitz mentions that noises are the main trigger, which is not uncommon for many dogs.

Why do these things cause our dogs to bark?

Is My Barky Dog Scared?

It is important to look at his body language. Body language is a key tool when investigating the underlying cause of a behavior.

Nose to tail — check what he is telling you! This means the whole body can indicate fear. A scared, stressed dog might look like:

Because noises happen suddenly and are quite startling, there is generally a lack of early warnings that we might normally see in other scary situations.

It is important to note, when a dog is fearful (of a sound or any other trigger), it is an emotional response rather than a learned or inherently rewarding behavior.

One of three things will happen when your dog is startled or scared:

Sound sensitivity can begin to make your dog hyper-aware, even inside your house. Any novel noise can become a trigger.

Often noise sensitivities are related to other forms of anxiety, particularly separation anxiety. Sometimes what happens is our dog is afraid of one sound (thunder, for example), but over time, he begins to generalize to other noises as well.

If your dog seems stressed and hyper-alert, your problem is likely fear-based.

What Not to Do: Punish the Dog for Barking!

In either situation, we want to avoid punishment. Punishment could make the situation worse and doesn’t teach our dog what we would rather them do instead.

Likewise, telling our dog “no” repeatedly, is likely not getting you anywhere. The word “no” would need to have some sort of consequence attached to it to have meaning for Barking Blitz’s dog.

For example, “no” could mean a raised voice, enough to scare some dogs. This would be a form of punishment, and doesn’t teach our dogs anything. “No” could also mean ‘stop doing what you’re doing and grab your toy, let’s have a game of tug instead.’

These are both a potential consequence of the word “no.” One is positive and one is negative.

However, it could also be completely neutral.

I suspect for most people, you have used this word repeatedly without it really meaning much of anything at all. It’s just become an annoying voice in the background rather than offer any type of information or solution.

How Can I Teach Him Not to Bark?

Prevention before interfering is the first plan of action. If we are aware of our dog’s triggers, we can have our dog redirect to an alternative and more desirable behavior before the barking begins.

We can also teach him some better alternatives.

Here are some things Barking Blitz might consider with their dog:

The Fallout of Bark Collars

What about all of these gadgets out there that claim they can stop your dog from barking? Surely a spray in the face with citronella can’t be that bad, can it?

In order for something to effectively stop a behavior, it has not be scary or unpleasant enough for your dog to want to avoid it.

The problem is, this punishment comes at a price. Your dog may become more fearful of not only the sounds, but of other things in his environment that happen to be close by. Including you.

It can be detrimental to a solid bond and a close relationship you have with your dog.

And, as we just discussed above, there are better and kinder alternatives.

Barking is completely solvable, but old habits die hard. It may take a while. Be consistent with your training and management. Good luck, Barking Blitz, and happy training!