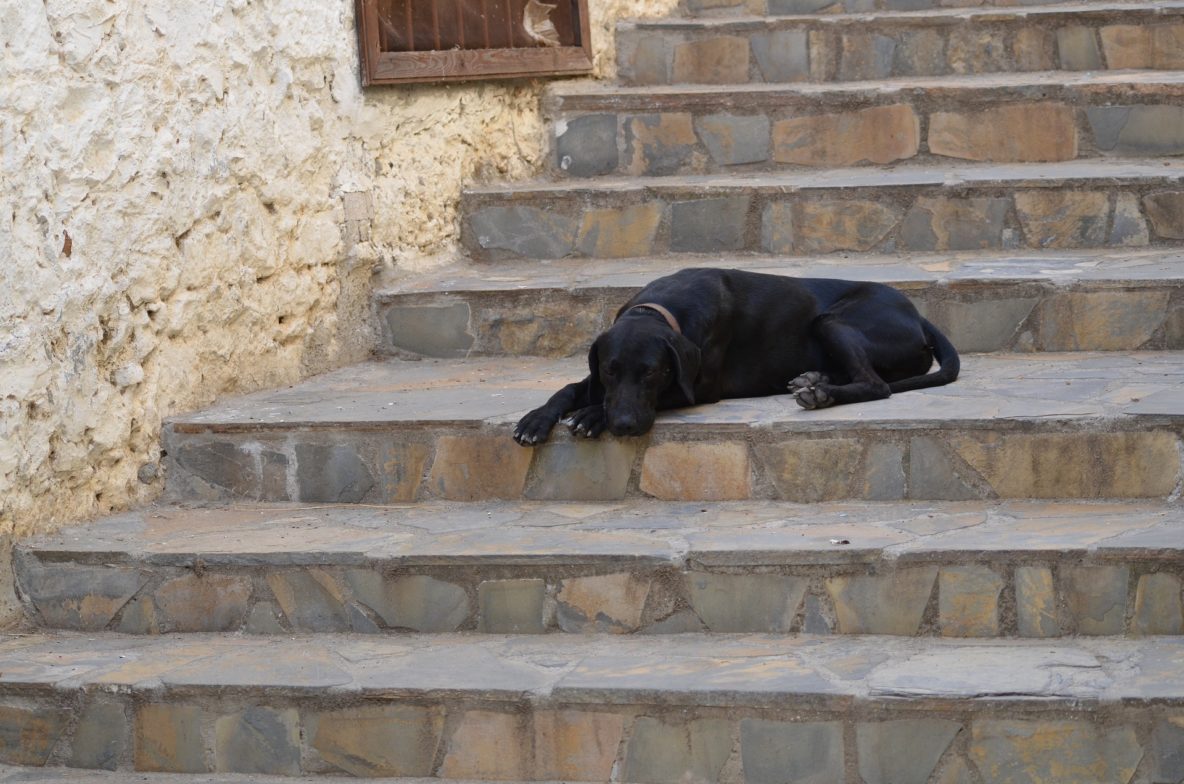 Stairs can be a tricky obstacle to navigate for our four-footed friends. They require a lot of coordination. They can be slippery, steep, and challenging for some dogs.

But what about a dog who used to have no problem with stairs but has developed a fear of using them?

In today’s Ask a Behavior Consultant, our reader asks:

“TJ, our 4 year old Golden Retriever developed a strange fear of our basement stairs. He would run up and down them, but one day hit the baby gate at the base of the stairs and it scared him. He has not come down these particular stairs ever since.” – Gracious Golden

If your dog is fearful of things in his environment, check out these resources from Journey Dog Training:

In Gracious Golden’s case, TJ has made a negative association with the basement stairs because of a bad experience with the baby gate.

Sometimes, just one negative experience can be enough to prevent your pup from ever wanting to take the stairs again.

First we need to decide if it’s important for TJ to learn to regain his confidence in the basement stairs, or if life goes on just fine without them.

For example, if the basement is off limits (hence the baby gate at the bottom), it may be fine to leave well-enough alone.

However, if the basement is somewhere the family hangs out and TJ would like to be a part of the action, then it’s definitely a problem we want to tackle!

Step One: Are The Stairs Too Tricky?

First, let’s consider the stairs themselves.

Are they hardwood and slippery? Are they carpeted? Are they more steep than the rest of the stairs in the house? Is the baby gate still lingering at the bottom of the stairs threatening the same fate? Is there clutter on the stairs that might make the stairs seem more intimidating? Is your dog in pain, so going down stairs hurts his hips?

You probably can’t mellow out the angle of the stairs without major changes, but grippy surfaces on the stairs will help a lot!

Step Two: Reintroducing Your Dog to the Stairs

We are now ready to slowly reintroduce TJ to the stairs.

Keep in mind, it is important to allow TJ to dictate the pace that he is most comfortable with.

First, grab some very tasty treats and fill your pockets. Have a seat on the first or second step and every time TJ so much as looks at the step or leans in the direction of the step, toss a treat to him. That’s it!

All he has to do is look!

We want him to learn that the stairs are not hot lava, but that instead, the stairs equal yummy treats!

It’s important to note that we’re not luring TJ down the stairs with a delicious treat trail. This can be perceived as a trap by many dogs. Instead, we’re rewarding TJ for tiny steps (or glances) in the right direction.

Now we want to encourage him to place a paw on that first step. When his paw touches the step, offer him lots of praise and a tasty treat. I usually find that placing a tasty treat on the step is good encouragement.

They can simply reach for it, but generally they will end up putting at least one paw on the step itself. When his paw hits the step, I reward him with a second treat. Then toss the treat away from the stairs to re-start the process.

If he exceeds this and puts two or maybe all four paws in the step, you can give him a jackpot! Throw a party, give him a handful of treats and shower him with praise (provided TJ enjoys the praise that is!)

Be sure to take frequent breaks.

Repeat step three until he has made his way from the top to the bottom of the staircase. Then you can repeat the process all the way back up. From the sound of it, going back up will be less of a problem since the scare happened on his descent.

Always let your pup move at their own pace when they are fearful. Pushing them into doing something they are uncomfortable with could make the situation worse.

And your patients is a virtue. The level of fear your dog has developed may dictate the amount of time it takes to resolve it. So go take your time to set him up for success!