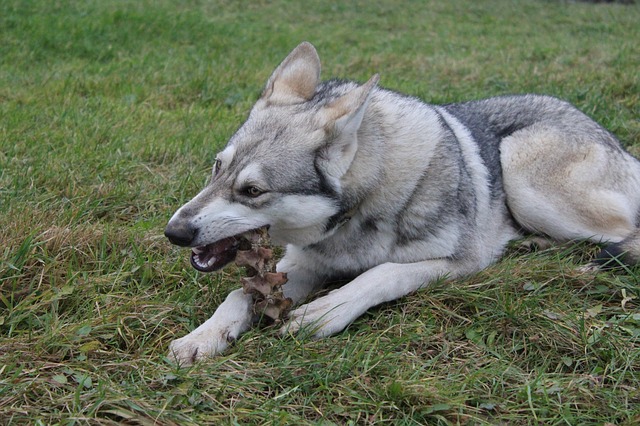 Many puppies explore the worlds with their mouths. But what should you do if your puppy actually eats a lot of dangerous things? Or what if your dog doesn’t grow out of it and still eats everything as an adult?

We’re going to tackle a common behavior problem in today’s Ask a Behavior Consultant: dogs who eat everything at their own peril. Our reader asked,

“My dog eats absolutely everything. Mostly things outside is what I’m concerned with. He had choked on many sticks and chunks of grass. Please help!”

If you’re dealing with a dog who eats everything, be sure to check out the following resources from Journey Dog Training:

Experienced readers won’t be surprised to hear that the dog in question here is a retriever. Retrievers are notorious for picking things up with their mouths – that’s their job! It’s also pretty common for that instinct to go too far.

While grass-eating might “just” cause some gross poo or a bit of vomit, it can actually be really dangerous for dogs to eat non-food objects. Socks and rocks and other non-food objects can cause intestinal blockages that require expensive and dangerous surgery.

After a few surgeries, your dog can even run out of intestine (the vets don’t have enough left to stitch together because they remove a bit each time they operate). These dogs can die.

Yes, dogs eat gross stuff. But goose poop and rotten pigeon wings are probably less dangerous for your dog than underwear or sticks. There’s a difference between “a gross dog doing gross dog things” and a dangerous habit of a dog who eats everything!

How to Help a Dog Who Eats Everything

Some dogs who compulsively eat things need to be managed with muzzles for their whole lives. Most don’t need that level of care – training will do the trick.

But if your dog has already had a few surgeries or other close calls, it’s far better to use the muzzle and keep everyone safe.

Help! My Dog Won’t Stop Marking in the House!

If you’ve ever had a dog who marks inside your house, you know how frustrating this problem can be. You...