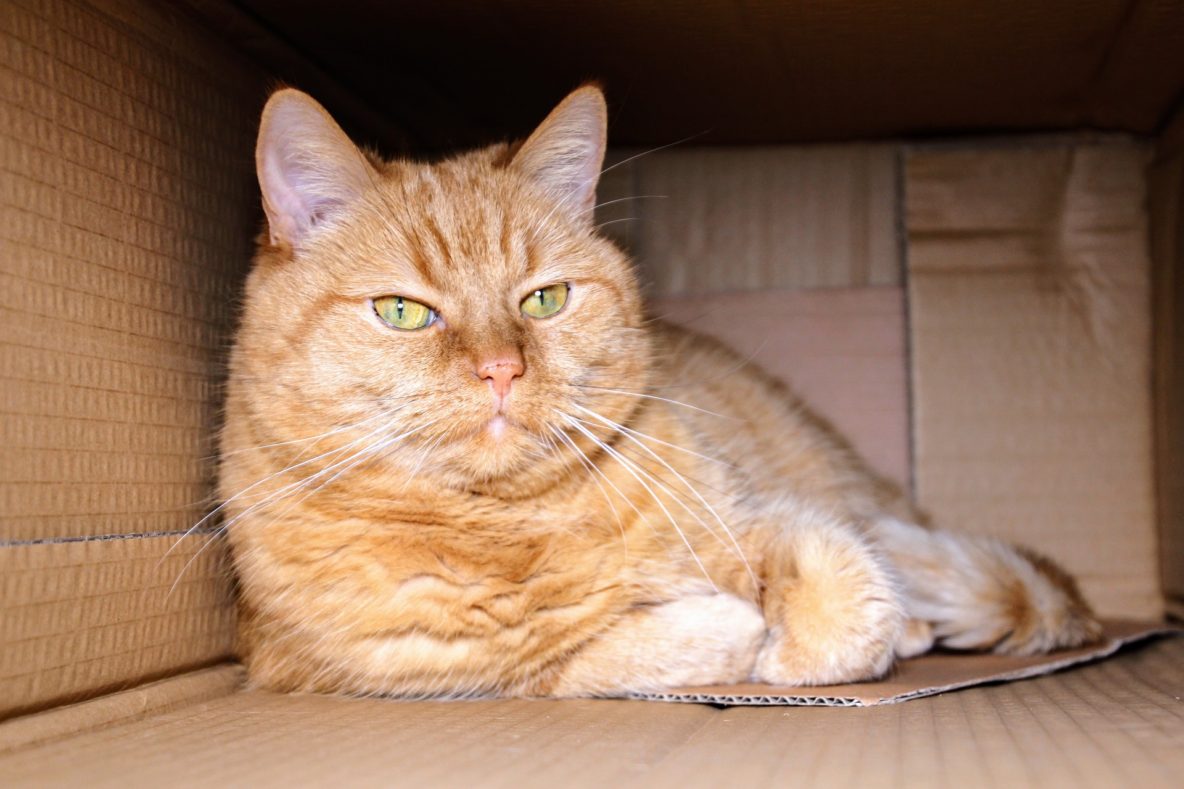 Here are the main things you need to know:

In our most recent “Ask A Behavior Consultant” question, a reader asked:

Any thoughts on how to break Panda, my 17-year-old cat, of peeing and crapping outside his litter boxes? He used to crap under the oil tank but now he is starting to use other places in the basement. I’ve been cleaning his litter box more often, but now he won’t use his covered box at all!

Other things to keep in mind:

In order to know which of these problems is plaguing Panda, the first stop should be the vet’s office.

Even though Panda is both peeing and pooping on the floor, we need to rule out a UTI or more serious medical concern as the first step.

Tell your vet what’s been going on with the box and they’ll run the right tests.

Basic Steps to Stop Your Cat From Pooping on the Floor

Let’s go through the options. It won’t hurt to try each of these options to help your cat use the litterbox again.

Keep in mind that fixing a medical problem and reducing your cat’s stress need to be your #1 priority.

The vast majority of my recent litterbox cases have turned out to involve a cat with a medical concern, like GI issues, diabetes, a broken elbow that made stepping into the box painful, or a UTI.

The cleanest boxes in the world won’t help if your cat has a UTI!

Depending on where he’s peeing and pooping, a good short-term solution is to block off the areas he’s using as an alternate box. Closing him into a small area (like a bathroom) with his box can also help kickstart litterbox habits.

If your cat already has a bad association with the old box, you might be best off trying a new box. If your current boxes are deep and covered, try a shallow box in another area of the basement.

Get something like Clean Carl’s and a blacklight. Go through the house and find all of your cat’s old accidents and clean the crap out of them. If your cat smells old urine or feces in a corner of the basement, he might think it’s a good idea to pee there again. So clean it really well using a cleaner that’s made for pet urine!

This could mean playing music when you’re at work, giving him some daily play sessions with a good wand toy (even if he just watches it), giving him daily treats through a puzzle toy or just spending more time with him. All of this will help reduce his stress level. Remember, stress is often the root of litterbox issues!

Many cats simply won’t use a dirty box. Even if your cat has always been a trooper about getting his paws dirty, he might be getting picky in old age. Try to scoop the box daily or even twice daily.

Again, this stuff seems like voodoo stuff – but Feliway can really help in some cases. It’s a calming pheromone that you can put into a wall diffuser or use as a spray. I know plenty of people who swear by it. As far as I can tell, it can’t hurt.

Unfortunately, there’s not much of a training quick fix when it comes to your cat pooping on the floor. Make sure that the litterbox issues aren’t medical. Then your best bet is to improve litterbox setup and decrease stress levels. There are some diffusers and other products that can help, but alone they’re unlikely to solve the problem.

8. Add Cat Attract to the litterboxes.

This little product is made to help remind cats to use their box. There’s frustratingly little information about what’s in Cat Attract or why it works. The website just says that it’s natural, they tested it, it works, buy it. I’d be skeptical, but… we use it at the shelter and I know several people who swear it makes a difference. Can’t hurt to try.

Why Your Cat is Pooping on the Floor

There are many things leading to a cat pooping on the floor. Let’s run through some common scenarios. Remember, it’s possible that Panda is suffering from several of these. Luckily the solutions are similar for all of them!

If he’s got a UTI, urinating might be painful. He might learn that peeing inside the box hurts, so he tries peeing elsewhere to see if that helps. Given his age, it’s a good idea to check with the vet to rule out other serious medical concerns. No matter what you do for his behavioral health, we can’t fix anything if he’s physically unhealthy.

When older cats won’t use the litterbox, it could be because they’re in pain. Squatting might hurt, or stepping into the litterbox might be more difficult than it used to be.

3. Your cat is stressed.

Many cats don’t deal well with stress. This could relate back to being sick – he might be stressed because his joints ache. Or he could be stressed by something that’s never bothered him before (like the oncoming brutally cold Wisconsin winter). There might be something you’d never notice that’s bugging him – like a raccoon behind the house that’s driving him nuts. Failing litterbox habits are a common symptom of stress.

As cats age, they might get more particular about their litterbox setup. He might not like that the litterboxes are all the way in the basement. Did you recently change the litter? Just changing the litter type is enough to set some cats off! Some cats like large, shallow boxes; others like deep, small ones. Many cats don’t like covered boxes at all. He might prefer more litter, less litter, a cleaner box, a bigger box, or just unscented powdery litter.

Given that Panda’s accidents are limited to the basement, I’m skeptical of this one. If he truly had little bladder control, I’d expect him to have accidents throughout the house. But this is a common reason for older cats to stop using the litterbox.

Got a cat pooping on the floor? I offer 15-minute consultations to find a solution. I cannot solve your problem in the comments section of this post.