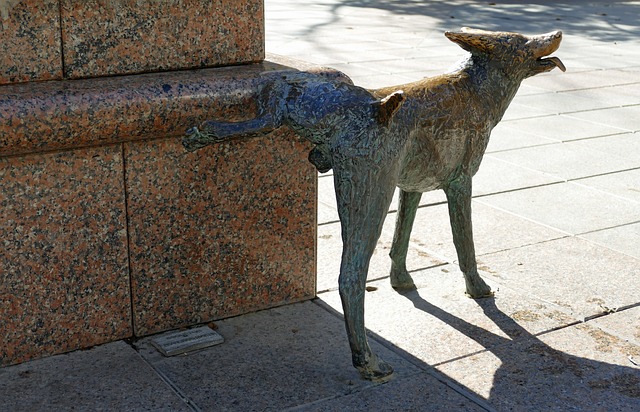 If you’ve ever had a dog who marks inside your house, you know how frustrating this problem can be. You might feel embarrassed, and you’re probably grossed out.

In today’s Ask a Behavior Consultant, we’re tackling the problem of a dog who won’t stop marking in the bedrooms of the home. He lifts his leg and pees whenever he enters the bedroom! Here’s how I’d tackle this problem.

“Our big guy keep marking the foot of everyone’s bed. With the exception of one time (a box) it’s always ours or kids beds but it’s mainly our room. He raises his leg every single time he comes in. This started at 3 years old and he’s 5 now.”
– Kodie the Bedwetter

If you’re dealing with a dog who marks inside the house, be sure to check out the following resources from Journey Dog Training:

Yikes! Three years is a long time to deal with a dog who marks indoors. So far, the owners have tried a lot of things. His owners wrote on their intake form,

“He’s been to the vet to rule out any medical conditions and he is healthy with the exception of pannus. We have tried feeding him in the area, crating him in the area, moving his dog bed to the area, soaking a bandana in his urine & placing that around his neck to discourage territory marking (gross btw) and finally we are keeping him from the area by shutting doors (out using gates) but now he’s barking and huffing at the kids when they leave their rooms.”

This problem, so far, far sounds more like marking behavior than medical-based problems.

If it was medical, I’d expect to see the problem continuing outside of the bedrooms when the bedrooms are closed off. But the Pannus diagnosis could still be in play – talk to your vet.

I also think that the dog barking and huffing at the children is concerning. I won’t address that here, but I urged these readers to talk to a trainer in their area and to try some treat-and-retreat with the dog.

I’d also like the dog to learn a “go to bed” behavior that the kids (or anyone) can use to send the dog away if he’s nervous about anything.

I don’t like seeing large dogs huffing and puffing at kids! Not good. This dog is also reactive to other dogs, so I’m seeing a lot of signs of stress and jumpiness or insecurity in this dog.

Part of our treatment plan needs to include building up this dog’s comfort level in his own home.

I also don’t like the advice of tying a pee-soaked rag on the dog. Like the owner said, gross! I’m sure these owners were following advice of experts they trusted for a dog who marks in the house, but this sounds like outdated advice at best. Skip this treatment idea. We can do better.

How to Stop Your Dog From Marking in the House

Let’s talk about this dog’s habit of marking in the house (specifically, peeing in the bedroom). Here’s how I’d treat it:

Really, we’re focusing on the basics of potty training here with a twist. We’re rewarding Kodie for every behavior in the bedroom that isn’t peeing. He can’t be sitting at your feet and lifting his leg to pee at the same time!