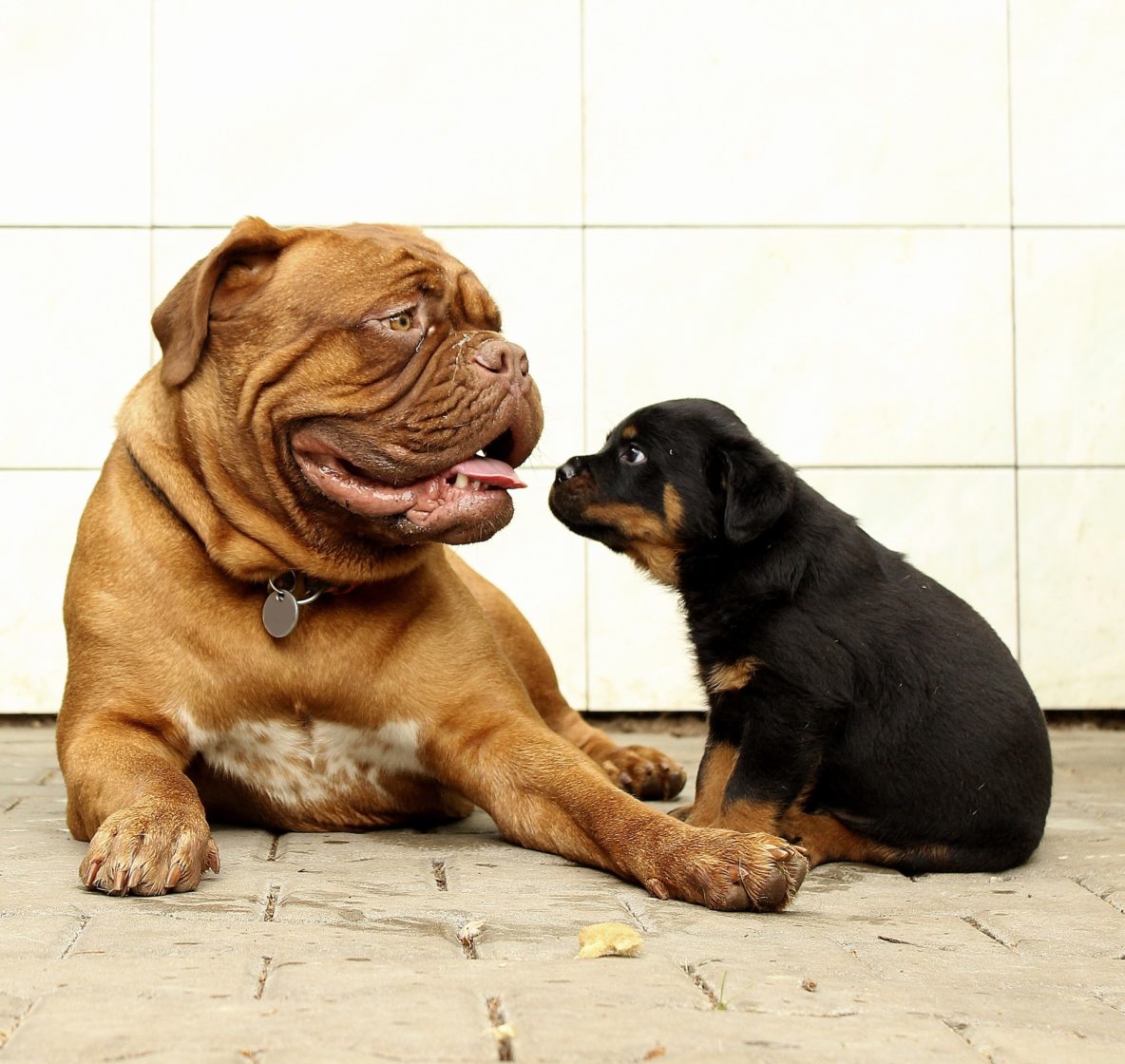 Some dogs get along well with other dogs their size, but are aggressive towards dogs bigger than them. This pattern is most common in small dogs, but you can find examples in all sizes of dogs.

My own dog, Barley, is much more tense with giant breed dogs like Great Danes and Wolfhounds. Barley isn’t a small dog – he’s almost 50 pounds – but huge dogs make him tense.

If you’re struggling with this problem, you might want to also check out these Journey Dog Training resources:

Why is My Dog Aggressive Towards Bigger Dogs?

The short answer is that we really can’t know, because we can’t ask your dog. But here are some likely reasons why:

It’s pretty common to have a few questions if your dog is aggressive towards bigger dogs. Let’s tackle those with a quick Q&A:

Is It Small Dog Syndrome?

Well… maybe? What IS “small dog syndrome?” It’s certainly not an actual diagnosis, the way hypertension syndrome or major depressive disorder is.

My personal inclination is that small dog syndrome doesn’t really exist – it’s just a name people give to the pattern of fearful behaviors commonly exhibited by anxious, undersocialized small dogs.

These little dogs are predisposed towards being nervous of big things – aren’t you more scared of a lion than a cheetah, or a cheetah than a house cat? When you’re little, big things are scarier.

But this problem is worse when the owners fail to help their small dogs learn that big things aren’t scary. The owners don’t expose their dogs to scary stuff and/or don’t teach their little dogs that scary stuff = treats.

Exposure isn’t enough here (read all about that here). Your small dog needs to learn that other dogs are actually safe to be around, and that takes work!

Can an Aggressive Dog be Cured?

Oh, gosh. The never-ending question in my field. All behaviors are modifiable. And we can always do something to make things better. In many, if not most, cases an aggressive dog can improve enough to be “good enough.”

But you can never really guarantee that ANY dog will never behave aggressively. We can’t even make that promise about humans!

Treating an aggressive dog will require a combination of management, counter-conditioning, and training the dog to do something else when he feels tense.

Punishing your dog for behaving aggressively will not help in the long run.

That’s because aggression is generally caused by a negative emotion, and punishing your dog will only make him feel worse about other dogs. While popping his collar or smacking him on the butt might interrupt the bad behavior, it won’t stop him from doing it in the long run. Worse, it might suppress warning behaviors (like lunging and growling) so he “looks better,” but then he skips straight to biting if a dog gets too close. Yikes!

Is My Dog Being Alpha?

Owners who see their dog being aggressive towards other dogs often think that their dog is trying to assert his dominance, prove himself to be alpha, or put the larger dog in his place.

To be frank, there’s no evidence that this is the case. The studies that led to scientists thinking that wolf dominance structures were strictly hierarchical and enforced through violence have been debunked.

And let’s be honest – dogs aren’t wolves. They don’t behave the same way at all. They’re much more similar to wolf puppies, even when they’re fully mature.

So your dog might be a jerk to bigger dogs, but it’s not because he’s trying to assert his dominance.

Dominance does exist in dogs – but it’s a specific relationship between two individuals in regards to a given resource. So rude behavior between two stranger dogs isn’t likely to be related to dominance.

Ok, So How Do I Teach My Dog to Stop Being Aggressive?

There are a few things we need to do in order to begin to change your pup’s aggressive reaction towards other dogs.

In order to be successful, we need to manage your dog’s environment so that he is never feeling threatened, overwhelmed, or feeling as though he needs to defend himself from bigger dogs.

2. Avoid Punishment When Your Dog is Scared

Sometimes after a bad experience, it’s not just our dogs who behave differently — sometimes we also change our behavior!

In order to control a bad situation, people often resort to yelling or tugging on their dog’s leash when they are in a precarious situation. Sometimes people feel they need a harsher tool such as a sock collar or pinch collar to control their dog’s behavior.

These tools and strategies actually make matters worse. They can make aggressive behavior worse, and cause your pup to become more fearful.

Your dog is feeling worried or anxious, and it’s ok to comfort him.

The aggressive reaction he is expressing towards other dogs is not intentional, it’s reflexive.

He is worried and is trying to tell that other dog to go away. It’s ideal to help him to avoid these situations and to look to you for support.

3. Change His Opinion About Other Dogs

There are a few strategies we can use to help your pup cope with seeing another dog:

I highly recommend a positive trainer or a behavior consultant to help you with this process. They can help you get started and assure your timing of treat presentation is perfect!

Practicing these tactics once or twice a week isn’t going to get you very far very fast. It takes patience and perseverance! Even if you get out to practice for 5 minutes twice a day, you’re doing great!

Try to keep the sessions short and sweet. Sometimes the first or second big dog you see on a walk is tolerable, but anxiety begins to build and the third, or fourth dog your come across put your pup over his threshold. Be sure to keep things short and sweet, but get plenty of repetitions in!